The Independent Corrupt Practices and other related offences Commission has instituted a grand investigation into allegations of corruption against some former state chief executive officers. 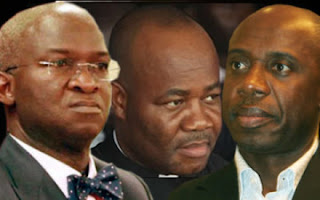 The Independent Corrupt Practices and other related offences Commission has set up a task force to probe eight former governors.


A top operative of the commission, who confided in our correspondent on Wednesday, said that the task force was set up following petitions written against the former governors.


It was learnt that top operatives of the commission working in the task force had been dispatched to the states to carry out the probe of the affected former governors.


A top operative of the commission said that the former governors were Alhaji Rabiu Kwankwaso of Kano State; Chief Rotimi Amaechi of Rivers, Alhaji Ibrahim Shema of Katsina and Sullivan Chime of Enugu State.


The source said that the other four were on the waiting list.


The former governors on the waiting list, according to the source are, Mr. Raji Fashola of Lagos State, Godswiil Akpabio of Akwa Ibom State, Martin Elechi of Ebonyi State and Alhaji Sule Lamido of Jigawa State.


The source said that the ICPC was not considering political parties or association in its response to allegations of corruption made against the affected personalities in the petition.


The source said, “It is true that we are going after eight former governors. The investigation against four of the former governors of Rivers, Katsina, Kano and Enugu has commenced.


“However, the commission has listed four other former governors who are on the waiting list because of petitions against them. They are the immediate past governors of Lagos, Akwa Ibom, Ebonyi and Jigawa States.


The probe is coming on the heels of a recent move by the ICPC to move 47 crack detectives to the states and the zones to strengthen them in the fight against graft in the society.


The Resident Consultant, Media and Events, of the ICPC, Mr. Folu Olamiti, refused to comment on the story when contacted.


None of the ex-governors was available for comment on the probe
Posted by MAN ABOUT TOWN at 7:08 AM