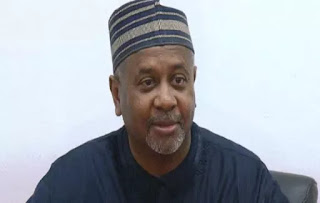 Mr. Dasuki was first arrested by the SSS in July after a prolonged siege on his Abuja home.

He was charged to court with illegal possession of arms and money laundering.

Justice Adeniyi Ademola of the Federal High Court last Tuesday granted Mr. Dasuki’s request for his passport to be released, to enable him receive treatment abroad.

However, PREMIUM TIMES gathered that the former NSA’s plan to travel on Wednesday night was thwarted by the SSS.

A source who declined to be named for security reasons said the SSS had succeeded in getting a warrant to enable them keep him under house arrest until the next adjourned date.
“The DSS suspects that the former NSA may not return to the country and are therefore, doing everything to make sure he does not leave Nigeria,” the source said.

When PREMIUM TIMES visited the residence of Mr. Dasuki Thursday, there was no sign of SSS personnel like in the past. There were however three men in civilian clothes sitting in front of the house. We could not confirm their identities.

“Most of them are inside and they have confined him to a House arrest,” our source said.
The SSS could not be reached. The has yet to announce a new spokesperson since the retirement of Marlyn Ogar.
Posted by MAN ABOUT TOWN at 5:32 AM