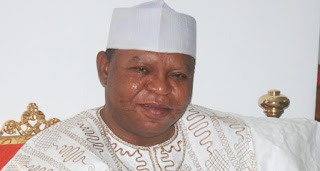 The Independent National Electoral Commission (INEC) declared the exercise inconclusive, saying there would be supplementary election in 91 units —a decision condemned by senior legal experts as “simply wrong”.

Audu died in his village Ogbonicha-Alloma in Ofu Local Government Area following complications from a stroke. His death set off arguments about the future of the election.


“I think he will be buried on Monday in accordance with Islamic rites,” a source said.

It was learnt that Audu had been billed for a medical check-up this week. He was said to be feeling unwell since Friday.

Another source said he died yesterday morning even before the results were announced, contrary to the information that he died after the elections were declared inconclusive.

The circumstances of Audu’s death could not be confirmed.

Audu’s remains will be buried in his home town this morning according ot Islamic rites.

Governor Idris Wada is expected to lead the government team to his burial, it was learnt last night.

When Audu’s running mate James Faleke, was asked at about 5p.m. to leave his home base in Ekinrinade for Lokoja, there was the suspicion that something untoward had happened.

A source, who spoke in confidence, said: “At about 5pm, Mr. Faleke got a call to proceed to Lokoja to attend to an emergency. Faleke later moved from Lokoja to Ogbonicha-Alloma.

“A worried Faleke then asked what was wrong. He was then told that Audu had a partial stroke and needed urgent attention. This made Faleke to immediately embark on an unprepared journey.

“Shortly after hitting the road, Faleke’s phone was bombarded with calls on what happened to Audu. He also was in a dilemma and had no answer to the enquiries.”

The National Secretary of APC, Mallam Mai Mala Buni said: “We have not received any formal notification from the family but we just heard the announcement that he is dead.”

A national officer of the party said: “Yes, my brother, Prince Abubakar Audu is dead.”

An aide to the late Audu said: “This is a tragedy. I just lost my boss. He did not make it despite the efforts of everybody here to revive him.  Everyone is crying here and I will call you later.”