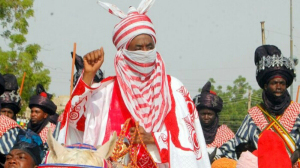 In a dramatic turn of events, a Kano Prince, Salim Bayero, who dragged the Emir of Kano, Mallam Muhammadu Sanusi II, to court last week over plot by the emir to tamper with
the structure of the centenary old palace has instructed his attorney to discontinue the case.

Prince Bayero’s attorney, Sanusi Umar Sadiq, told Vanguard on phone that the royal family had resolved to settle out of court.

Sadiq said that already, he had filed a withdrawal notice in line with the directive, adding that the matter was slated to have been heard today.
“Bayero’s family has agreed to settle out of court and we have filed withdrawal notice before the court,” he said.A Kano High Court had last Friday restrained the Emir of Kano, Alhaji Muhammadu Sanusi II, from either demolishing or tampering with any structure in the Kano Emir’s palace pending the hearing of the motion on notice.

The presiding judge, Justice A. T. Badamasi, also restrained the Emir and the Emirate Council from giving quit notice to any person residing inside the palace, known as Gidan Rumfa, until the determination of the substantive application.

The order restrained ‘the first and second dependents/respondents from giving quit notice or evicting any person resident in the Emir’s palace by virtue of being or Bayin Sarki, pending the determination of the substantive application.”

Justice Badamasi further directed the parties involved to maintain the status quo, pending the determination of the substantive suit.

However, briefing newsmen on the development, counsel to the plaintiff, Barrister Sanusi Sadiq, alleged the emir and the Emirate council were seeking to destroy the grave yard which housed the tomb of 13 former Kano Emirs.Sadiq said the plan to demolish the structures in the palace was capable of killing the ancient tradition for which Kano Emirate council was known for.
Posted by MAN ABOUT TOWN at 5:50 AM