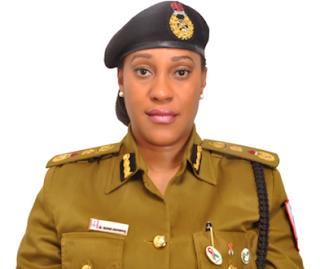 The wife of PDP Chieftain,Chief Bode George- Roli will be running the affairs of the National Drug Law Enforcement Agency (NDLEA) following the
retirement of its Chairman, Ahmadu Giade, on Wednesday, November 25 2015.

A statement by the agency’s spokesman, Mr Mitchel Ofoyeju said Giade, who served two terms of five years each, handed over the affairs of the NDLEA to the Director- General (D-G) of the Agency, Mrs Roli Bode-George.

According to the statement the former Chairman inspected a guard of honour after which he presented a new flag to the D-G.

”This is the first time in the Agency’s history that an outgoing chairman will successfully serve for 10 years without blemish,” the statement said.

The statement also quoted Giade saying that he was leaving the agency better than he met it 10 years ago.

”My greatest legacy is my zero tolerance for corruption.

”If we must continue to dislodge drug barons and eradicate drugs from our society we must remain forthright and committed to drug control programmes.

”I am also leaving behind a legacy of proactive and intelligence-led organisation.

”The Agency, under my watch has a representative at INTERPOL headquarters and has successfully raised the international profile of the country through unprecedented seizures of drugs and arrest of drug barons,” Giade was quoted as saying.

Giade cited the removal of Nigeria from the list of major drug transit countries by the U.S. and the cordial working relationship with stakeholders as some of his other achievements.

“The removal of Nigeria from the majors list opened doors to a robust cooperation and partnership with stakeholders.

He urged the new boss to take officers welfare as a priority.

In her speech Bode-George said that the agency would continue to enforce the rules of engagement and uphold the tenets of integrity.

”NDLEA will continue to be proactive and operate as an intelligence-led agency.


”The Agency will apply modern techniques and diligently implement the National Drug Control Master Plan in collaboration with stakeholders,” she said.
Posted by MAN ABOUT TOWN at 11:06 PM