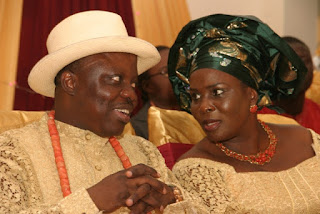 Their cunningness and abject desperation to be “blessed” evoked memories of conniving, luckless muskrats, caught in a labyrinth of covetousness and political machinations. Sneaky penitents that they were, gleefully deserted their parents at home to adopt Roli Uduaghan, former First Lady of Delta State, as their spiritual guardian and mother
.

They called her “mummy” and worshipped the ground on which she walked, even as they neglected their biological mothers at home – like the habitual nincompoop doomed to starve his mother of love and provisions, to the death, while he groveled at the feet of Roli, the overfed and almighty “mummy,” in a desperate lunge for personal and political favours.

There is no gainsaying the wife of the former Delta State Governor, Emmanuel Uduaghan, curiously found salvation during her husband’s administration. To maintain her status in the new faith, Roli built a magnificent church in Asaba; the church was located on Okapanam Road, opposite the newly constructed Asaba General Hospital, and the worship house attracted the crème of Delta’s political elite and socialites.

The church gained massive membership comprising top politicians in the state who saw it as meeting point to clinch, negotiate and iron out prospective deals and contracts. Those who wished to climb up the political and social ladder by seeking favors from politicians also trooped to the church to achieve their aim.

The church was always filled to the brim during the administration while the Uduaghans occupied the Delta State Government House but no sooner did Roli’s husband quit the governorship seat than her flock began to dwindle. The church which once recorded thousands of worshippers in attendance drastically reduced to few members every Sunday according to an ex-worshipper at the religious edifice.

The glory which once filled the arena gradually fizzled out to the chagrin of the former Delta First Lady. This caused her great bitterness and unprecedented heartbreak.


Indeed, Roli has been schooled in the transience of power and acclaim by her fair-weather congregation or “spiritual children” if you like