Ooni Enitan Ogunwusi, Ojaja 11 Finally Gets Staff Of Office In The Midst Of Bubbling Excitement & Drama 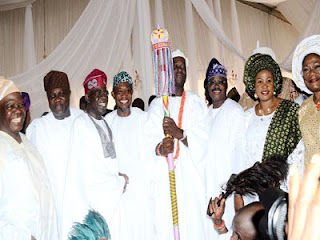 At a colourful ceremony attended by an army of dignitaries, the Ooni of Ife, Oba Adeyeye Babatunde Enitan Ogunwusi Ojaja II,
yesterday received his staff of office from Osun State Governor Rauf Aregbesola.

There was ovation as Aregbesola handed the beaded staff and a certificate to a beaming Oba Ogunwusi at Enuwa in the ancient town, which is believed to be the cradle of the Yoruba.

The royalty was well represented.

So were the Aragbiji of Iragbiji, Oba Abdulrasheed Olabomi, the Akinrun of Ikirun, Oba Olawale Olayiwola Adedeji, the Osile of Oke-Ona Egba, Oba Adedapo Tejuosho, the Olofa of Offa, Oba Mufutau Oloyede Gbadamosi, and a host of others attended the event.

Other dignitaries at the event were members of the National Assembly, members of the Houses of Assembly from Osun, Ogun and Oyo states, Christian and Muslim clerics,  academics and business magnates, among others.

Osinbajo, who arrived at  11: 40 am, paid glowing tributes to the Ooni.

According to him, the Ooni needs hard work, character and integrity in view of the enormous task before him

He said: “The position is not for ostentation but for service to humanity. As we hand over the staff of office to you today, we are reminded that you have the primary responsibility of being the physical undertone of the virtue of Omoluabi.”

Quoting the Ecclesiastes 10:16-17, Osinbajo urged the Ooni to apply God’s wisdom on the throne to succeed.

The Sultan of Sokoto, Sa’ ad Abubakar, who spoke on behalf of the traditional rulers, advised Oba Ogunwusi to contribute meaningfully to the ongoing peace efforts in the country, noting that his enthronement came at a time the country needs “credible agents of peace, harmony and progress.”

He thanked Aregbesola for accepting the choice of “a dynamic and youthful king” recommended to him by the Ife kingmakers.

Before he presented the staff of office to the Ooni, Aregbesola urged him to imbibe the fear of God, justice, fairness and righteousness to succeed.

He also urged him to use the throne to usher in a new era of peace, harmony, progress and prosperity not only in Ife but also in Osun State and the country.

The governor told the Ooni: “You came to the throne at a time the Yoruba race needs progress, unity and harmony more than ever before.”

Aregbesola then presented the staff of office to the Ooni at exactly1:51 pm amid thunderous ovation from the crowd.

Aregbesola enjoined Oba Ogunwusi not to place personal interest ahead of the people’s interest.

He said: “You must be guided by their interests, which include political, ideological and social. Love them, guide them,listen to them, be a father to all of them, be in touch with them and help them to achieve their goals.”

Shops and markets in Ile-Ife were closed as a mark of honour to the Ooni.

Early in the morning, banks in Osogbo, the state capital, were not sure whether to open to customers or not, until many of them received directives from their headquarters before clients were allowed into the banking halls.