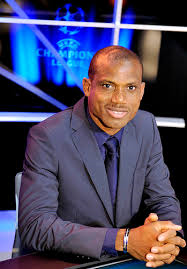 After several weeks of controversy between the Chief Coach of Nigeria’s national team, Sunday Oliseh and his employers, the Nigeria Football Federation (NFF), Oliseh, in the wee hours of Friday, announced his resignation as Chief Coach of the Super Eagles.


Oliseh Oliseh who took to his verified Twitter handle, @SundayOOliseh to announce his resignation said: “I feel fortunate, blessed and eternally grateful for having had the honour to play, captain and coach this great nation of ours, Nigeria. Due to contract violations, lack of support,unpaid wages, benefits to my players, Assistant Coaches and myself, I resign as Super Eagles Chief Coach.”


Oliseh had since changed his profile on the micro-blogging site to Ex-Chief Coach of the Super Eagles. 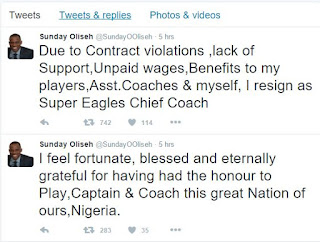 Recall that Oliseh, signed a three-year deal on July 15, 2015, succeeding Stephen Keshi, who was sacked at the start of July.

He spent barely eight months as Eagles chief coach. Oliseh, earned 63 caps for Nigeria and helped the country win the 1994 Africa Cup of Nations and Olympic gold in 1996.
He became the fourth player from the class of 1994 to manage the Super Eagles after Austin Eguavoen, Samson Siasia and Keshi.