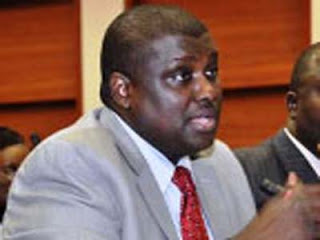 THE International Police Organisation (INTERPOL) has issued a “Red Notice” on ex-Pension Reform Task Team Chairman Mr. Abdulrasheed Maina, who is believed to be out of the country.


This will enable relevant security agencies to arrest Maina in any part of the world.

A statement by the Head of Media and Publicity at the Economic and Financial Crimes Commission (EFCC), Mr. Wilson Uwujaren, said Maina was wanted for his alleged role in the fraudulent biometric contracts through which he and ex-Head of Service Steve Oronsaye and two others allegedly mismanaged over N2 billion pension funds.

Maina was, on July 21, 2015, charged with Oronsaye, Osarenkhoe Afe and Fredrick Hamilton Global Services Limited at a Federal High Court on a 24-count of procurement fraud and obtaining by false pretence.

Whereas Oronsaye and two others were in court and pleaded not guilty, Maina had been at large.


However, on July 21 when the court heard the bail applications of the accused, Maina through his counsel, Esther Uzoma, told the court that he was not at large, claiming that the EFCC never invited him.

Despite his excuse, Maina has not appeared for trial from his alleged hideout.

Some reports said he was in the United Arab Emirates (UAE). But his sympathisers claimed Maina was still in the country.

The situation prompted the EFCC to engage the INTERPOL to track him down.

It was, however, learnt from a top source in EFCC that the INTERPOL issued the notice, which would make his arrest possible in any part of the world.

The source said: “The INTERPOL has issued a world-wide red alert on Maina. The notice is based on a request from the EFCC, which on November 18, 2015, wrote to the Inspector-General of Police, Solomon Arase, seeking his assistance “to issue an INTERPOL Red Alert” on Maina, who was charged to the Federal High Court on July 10, 2015.

“In a response to the anti-graft agency’s request, Olushola Subair, commissioner of Police, INTERPOL, in a letter dated January 11, 2016, addressed to the Chairman, EFCC, Ibrahim Magu, informed the agency that its request had been processed and a notice duly issued by the INTERPOL.

The letter reads: “Be informed that the bureau has taken necessary action on the wanted fugitive as requested with INTERPOL General Secretariat, Lyon, France. He has been published on the INTERPOL Red Notice accordingly.”

“The import of the notice is that there is no hiding place anywhere in the world for Maina, who was indicted by the EFCC for fraud and the theft of over N2 billion in pension funds at the Office of the Head of the Civil Service of the Federation.


“He is widely believed to be hiding in the United Arab Emirates. EFCC earlier declared Maina wanted after obtaining a warrant of arrest from court.”
Posted by MAN ABOUT TOWN at 5:45 AM