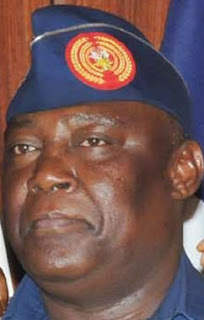 Immediate past Chief of Defence Staff, air Chief Marshal Alex Badeh, spent his first ever weekend with inmates of the Kuje Prisons because of his inability to fulfill the bail conditions slammed on him by a Federal High Court.

Air Marshal Alex Badeh The ex-CDS, who was granted bail by Justice Okon Abang of the FHC on Thursday following arraignment for alleged money laundering, could not immediately meet the bail conditions in order to leave the prison.

Among other conditions, he was to produce two sureties who can pay the sum of N1 billion each, have landed property in the FCT and provide evidence of three years tax payment.
...vanguard
Posted by MAN ABOUT TOWN at 12:49 PM