THE only surviving son of the late Minister of State for Labour and Employment, Barrister Aaron Ocholi, has promised to retain all the legacies of his father. 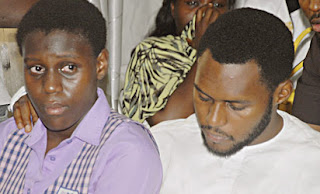 Aaron Ocholi who is 25 years, according to family sources, was saved from following his father to attend the Church service in Kaduna due to an ankle injury he sustained while training on a football pitch.

He was on crutches at the time the father and some members of the family embarked on the fatal trip.

Also yesterday, Deputy Governor of Yobe State, Abubakar Ali, was involved in an auto accident along the Kaduna-Kano expressway but escaped unhurt.

Already, the Ocholi family house at 4 Daggash Street, Kado Estate, Abuja, was a beehive of activities, yesterday, as ministers, lawmakers and heads of agencies trooped to the residence to commiserate with the family.

This resulted in a traffic gridlock on all the roads leading to the family house at Kado.

Speaking to the body of Senior Advocates of Nigeria, SANs, that visited the house, Aaron said he would not tamper with the legacy of his father and will never sell his books and law firm, assuring the SANs that with them, he would not derail. 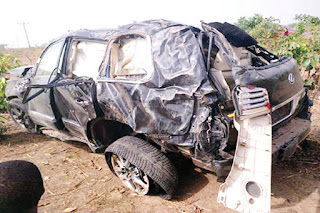 FRSC Kaduna State Sector Commander of the FRSC, Francis Udoma, confirmed to Vanguard in Kaduna, yesterday, that 10 persons were in the two SUVs, a Prado and a Lexus, involved in the accident that claimed the lives of the minister, his wife and son, adding that seven others who sustained  serious injuries were rushed to the hospital for treatment.

His words: “A total of 10 persons were involved in that sad accident. You have already written about those that died – the minister,, his wife and son. There are seven other victims, but they have all been taken to the Abuja National Hospital, yesterday.

‘’They were in two cars – a Prado and a Lexus.  All I can tell you is that at the time we took them there, they were given prompt medical attention. Since I am not the one treating them, I cannot tell you precisely how they are responding. But, I am told that they are responding well”, he said