Robert Nyong, the managing director of Lekki Garden Homes, was on Thursday granted bail on self-recognition by Chief Magistrate Afolashade Botoku of an an Ebute Meta Court. 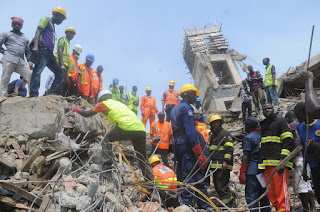 She had slammed a bail of N10 million with two sureties on Taiwo Odofin, one of the contractors of the collapsed building.

She ordered that the duo should report at the State Criminal Investigations and lntelligence Department, SCIID, Panti-Yaba, between the hours of 10.00 a.m., and 5.00 p.m., everyday until the police investigations were concluded.

She asked them to submit their international passports and should not travel out of the country until the case was concluded.

The News Agency of Nigeria (NAN) reports that Ms. Botoku had on March 11 ordered the remand of Robert Nyong, MD of Lekki Garden Homes and Taiwo Odofin, one of the contractors handling the project at their first arraignment following a remand application brought before it by the police.

Mr. Nyong is the owner of the five-storey building that collapsed in Lekki area of the state which killed 35 people.

The police had urged the court to remand the two defendants pending when they would conclude investigations.

When the case came up on March 23 to hear their bail application, the police failed to produce the accused and Ms. Botoku frowned at the attitude of the police.

At the hearing, the magistrate, who stood down the case for an hour, ordered the police to produce the accused before their bail applications could be heard.

The prosecution, led by Goddey Osuyi from the Police Legal Department, informed the court that the police failed to produce the two accused due to an intelligence report that some hoodlums had planned to attack the court.

Mr. Osuyi said that in the interest of safety, it was not advisable for the police to bring the accused to court.

Lawyers to the accused, Olabode Olanipekun and A. Uwangboje told the court that the prosecutor informed them earlier before the court sitting and urged the court to apply its judicial discretion in entertaining the excuse.

Ms. Botoku, in her ruling, disagreed with the police submission, saying that the court will not submit to a threat, which is the duty of police to ensure that adequate security was provided.

She adjourned the case to March 24, and ordered police to ensure the the two accused were present in court.

The court had on March 11 granted an ex-parte application brought before it by the police, seeking to remand the two accused in its custody pending conclusion of investigation. (NAN)