Our First Attempt At Kidnapping A girl Inside The School Failed Two Months Ago’’ Arigidi, Arrested Suspect In Abduction Of Freed Lagos Female Students Provides Details Of Crime That Tensed All

One of the suspected kidnappers of the three Lagos schoolgirls, Emmanuel Arigidi, 37, yesterday explained how the plot to kidnap the girls was hatched up. 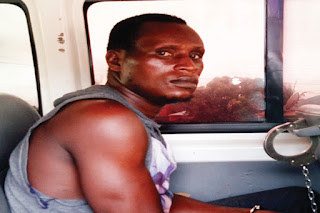 He also said the girls were not hurt while with their abductors. Arigidi, who also confessed to have participated in the bloody Ikorodu bank robberies, said he was stationed on the river and received N100,000 for ferrying the bank robbers to the creeks.

Arigidi, who claimed to be a traditional bone doctor, said the abduction of the schoolgirls at Babington Macurlay Junior Seminary (BMJS), Ikorodu was planned for two months.


The Ondo State indigene, who confirmed that the group stormed the school two months ago but could not kidnap any student, explained that they went back to the drawing board.


Speaking on his role in the abduction, the unmarried father of one said the gang was contacted by Lami Ami, who he claimed promised that they would make money.

“We were 12 that went for the operation. Others include Lami, who brought the information, Felix (aka Tradition), Abokin, Ekpokeme,  Preye, Owe, Godfrey and Gift (aka Bayelsa).

“We started planning the operation after our first attempt at kidnapping a girl inside the school failed two months ago. About seven of our men entered the premises and caught one girl but they could not take the girl out because she escaped.

“But this time around, we were 12 and we did not break any fence. The school fence is not very high so we jumped from behind and entered.

“The girls were playing outside when we got there and we took them. Yes we changed their clothes. We gave them jeans and tee shirts bought by Felix. That is standard practice.

“From there, we all moved to the Adamo creeks where we stayed with the girls. But problem started that night among us because I tried to tell them that the operation might backfire.

“I warned my members that we should release the girls but they insisted that the school had money and it is rich people’s school.

“My members were not happy with me and planned to kill me because they felt I would leak information if I was allowed to go. I sneaked out of the place, told them that I wanted to go to toilet and that was how I ran.

“I was arrested at a joint where I sat, not inside my canoe. While I was with them, they did not hurt the girls. No one harmed them. We were only after the money.

We fed them gari, fish and vegetable.

“We went to the school on seven canoes because the water is shallow. We parked the canoes at the back of the school and entered. While the girls were in the creeks I came out with one canoe to buy foodstuffs. 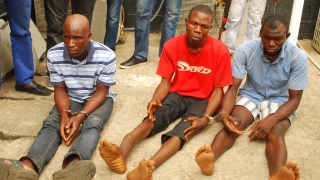 “We also contacted two people who were not part of the kidnap to assist with registering the SIM card we used in contacting the girls’ parents.

“It was when the police team arrested me that they knew where the girls were held before the father of two of the boys went there to convince them to release the girls,” Arigidi
Posted by MAN ABOUT TOWN at 12:34 AM