The Police in Lagos have arrested the contractor who is handling the collapsed five storey building in Lekki area of the state. 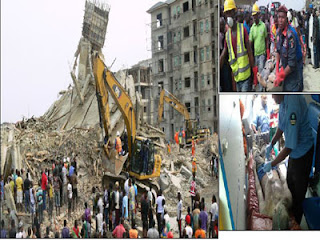 The Lagos State Police Spokesperson, SP Oladapo Badmus, who made the disclosure to the News agency of Nigeria (NAN) on Tuesday in Lagos, did not disclose where he was arrested.


Badmus gave his name as Odofin Taiwo, adding that he was currently under investigation.
Meanwhile, the Lagos State Emergency Management Agency (LASEMA) told NAN that the death toll at the collapsed five storey building in Lekki, had risen to 30 as at 4 p.m. on Wednesday

The General Manager of LASEMA, Mr Michael Akindele, told the News Agency of Nigeria (NAN) that as at 12.40 p.m. on the same day, 13 other people had been rescued.


Correspondents of NAN who were at the scene report that the 28th dead person was brought out from the rubble at about 2 p.m., and the 30th minutes before 4 p.m.

NAN reports that the dead bodies had been evacuated to the mortuary.

NAN also observed that stench from the dead bodies filled the air, forcing the rescue operators and other sympathisers to cover their nostrils with handkerchief.

“As we speak, we have been able to rescue 13 people alive, and unfortunately, 30 others have been brought out dead.

“The operation is still ongoing, and I want to commend all the security agencies that have ensured the protection of the rescue operatives.
NAN also reports that the Standard Organisation (SON) led by its Director, Inspectorate and Complaint, Mr Bede Obayi, inspected the collapsed building and others under construction in the area.

Obayi ordered for the collection of the different building materials used for the collapsed building, including iron rods, blocks, sand, granites and sea water for laboratory analysis.

“The first thing in a house is the block, from the ones we have examined here, it has failed the test.

“The construction of this building is not up to 50 meters from the sea, showing that this land was reclaimed from the sea.

“There are conditions for reclaiming a land from the sea and the kind of building materials to be used in such lands.

“We have to examine all the materials used for this building and see if they meet the condition,’’ he told NAN.

“You must be a registered professional engineer for you to handle this type of project.


“If you want to build, you must look for a professional. We are going to investigate all the structures and materials in this environment,’’ Obayi said
Posted by MAN ABOUT TOWN at 10:09 AM