There is nothing stable in wedlock. Love, loyalty, misery, bliss, loyalty, respect and pain become interchangeable like the fickle whim of an Eastern rainstorm, when marriage loses its magic. Ask Oyin Adeyemi and Segun Odegbami – uproar became the music of their love few months away from the moment they intended to swaddle themselves in the nuptial knot. 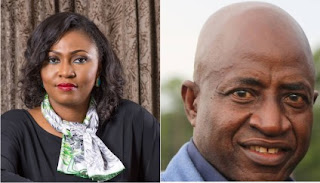 Oyin, the Chief Executive Officer (CEO) of StillEarth Ltd, a construction company and Odegbami, a Nigerian soccer legend, has finally called it quits with each other, few months after they got engaged to each other. The duo whose love seemed to blossom before and after their introduction ceremony, have parted ways with each other, to the consternation of their closest friends and family.
The Capital findings revealed that things turned awry between the couple and their love turned sour soon after they discovered that beneath their heartfelt display of passion and attraction to each other, they actually vibrated on separate wavelengths. The estranged couple encountered dissonance in the language of their love just before they cemented their union in holy matrimony.
Findings revealed that Oyin could no longer cope with the differences in values, morals and personal ethics that dogged their relationship. The fact that Segun was over 20 years older than Oyin accentuated the differences between them. Oyin eventually realised that Segun was not the man she thought he was. He couldn’t love her like she wanted him to and the differences between them created a gulf that expanded by the second thus thrusting them further apart.
Segun’s ways were different from Oyin’s ways and it took them a great deal of effort to accept this very sad fact. Issues bordering on personal discipline and tact became contentious between the duo.
Segun, a former Super Eagles soccer legend, eventually turned out to be incompatible with Oyin, the CEO of StillEarth. This is because he brought a lot of baggage with him into their relationship.
And very few people would forget in a hurry, the much publicised romance between the football icon, ‘Mathematical’ Segun and TV presenter/producer, Funmi Iyanda. Funmi, who is the fifth child in a family of 11 and a graduate from the University of Ibadan came to limelight with NTA’s ‘New Dawn at 10.’ During her time at NTA channel 10, she presented lots of programmes when she met and got involved with Segun Odegbami. The result of that union was a daughter, Morenike.
Oyin allegedly tried to gloss over the issues that separated them and weakened their love, but even love and loyalty are not enough to withstand the force of harsh, brutish reality – Segun came with too much drama and emotional baggage into their relationship. And even though they had done the marital introduction and engagement rites, Oyin eventually had to acknowledge that he was not the man for her.
Oyin, a glamorous equivalent of a modern heroine is posh, seductive and intelligent. The renowned icon of female power on the business realm, started out in banking before her impressive forays into the construction industry with StillEarth Ltd. Oyin is a star, a pioneer and workhorse with monumental focus.
These towering traits have led in no small measure to her speedy rise up the entrepreneurial ladder of commerce and acclaim. Oyin’s meteoric rise, according to a lot of her friends and business associates, is actually worthy of her exertions and diligence in her patient, steady march along the path of ambition and entrepreneurship.
Being with Odegbami is no doubt inimical to her dreams of marital bliss. He became a burden just when it was ripe for them to seal their union in Holy and everlasting matrimony. Segun was not the man for Oyin and Oyin could do better with more compatible company. It’s as simple as that. But despite the heartache and regret that resulted from their separation, the estranged lovebirds have moved on.
.. TheCapital
Posted by MAN ABOUT TOWN at 10:45 AM