In The Face Of Heart Aches & Apprehension Over Lost Fortunes In MMM Freeze, Report Unveiled Top Player, Chueddy Ugorji Who Cashed Out Big Time And His Wealth 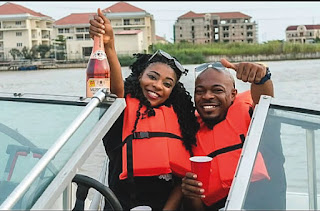 As apprehension over the fate of millions of participants in the Mavrodi Mondial Moneybox or MMM mounts in Nigeria after accounts were frozen, information emerged that some individuals might have become far richer than anyone can expect.
Some, it was learnt, have been made millionaires by the platform, but in the case of few others like one of MMM’s top men, Chuddy Ugorji, the gain may have run into billions.


Ugorji, who is the number one guider on the platform, has been the subject of different speculations, some of which claimed he might have made more than N1bn over the last one year.
Social media pictures of him on luxury boat rides or at luxury spots might have a lot to do with his new found wealth.
On the MMM website, Ugorji shared his testimonies showing that he got millions of naira from people who had “provided help” to him.
A screenshot even showed that Ugorji got up to N6m at a point.
MMM runs in a peer to peer donation system, in which you “provide help” by donating money to another participant and “get help” by requesting for money after some days with a 30 per cent increase in the initial donation made.
Ugorji was said to have joined MMM’s global platform in 2015 and has been its spirited promoter in Nigeria ever since.
There is no doubt that since becoming MMM’s top man, life has not been the same for the Imo State indigene, who describes himself as an online entrepreneur and businessman on his Facebook account.
Recently,photographs from his recent wedding, which took place at the Elshadai Covenant Church, Abule-Egba, Lagos, emerged online, given the first peek at the life of an individual, who leaves one in no doubt that the platform has been wonderful to him.
His wife, Chiamaka, who has also been a spirited defender of MMM’s credibility, is a graduate of the Imo State University and an indigene of the state as Ugorji. Before her husband released a statement on the fears over MMM on Friday, Chimaka had consistently written on her Facebook, assuring participants that their investments were safe.
Ugorji’s wedding was attended by celebrities and other guiders of MMM. The apparently lavish weddingwas MMM-themed with guests wearing MMM-crested sashes, while even the couple’s cake bore the MMM logo. To cap the royalty of the wedding, entertainment at the reception was provided by the Limpopo crooner, Kcee.
The important position Ugorji occupies in the MMM community came to light when he revealed on his Facebook wall that MMM guiders presented him with a brand Hyundai Crete SUV as a wedding gift.
“Thank you to our wonderful family, friends and great MMM community for your love, support and generosity. Our wedding day was indeed made so much memorable because of your presence and your blessings, MMM Guiders surprised me with a brand new Hyundai Crete SUV Jeep as a wedding gift may God bless you all for me,” he said on Facebook on November 13. 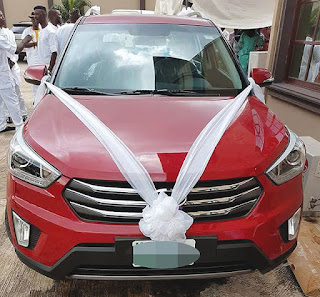 Ugorji, a son of a reverend, is a graduate of one of India’s distant learning universities, Karnataka State Open University, where he studied Business Administration.
Despite refutations by Ugorchi, some Nigerians have suggested that he actually brought MMM to Nigeria.
A Twitter user, Amadi Noel, tweeted ago about an alleged deal between Ugorchi and a Philipino millionaire.
Ugorchi himself had shared a photograph he took with a woman he called Ritta on Facebook in January.
The photograph was apparently taken in Dubai, where he allegedly finalised his deal on MMM Nigeria.
“With Ritta my partner and leader, a great woman and multi-millionaire. Am blessed (sic) to work with such a successful leader because success is contentious,” Ugorji captioned the photograph.
But in a statement he shared on his Facebook wall on Friday, Ugorchi, denied having any deal with any Philipino, explaining that MMM Nigeria is run by Russian, Sergei Mavrodi and controlled in Russia.
“The MMM website is being managed in Russia by their control and supervisory team .They are responsible for every decision made,like pairing of participants to provide help and get help,resolving issues on the platform. I have never been to Philippines,the stories about going to the Philippines are untrue,” he said.
However, many sceptics say those who have money in the system should probably not hold their breath.
But Ugorji laid the blame for the panic about MMM following the freeze on accounts onthe doorstep of the media.
“Some ignorant Nigerians who don’t understand what MMM is all about have been brainwashed by the information broadcasted (sic) by the media and social networks. Bloggers who get paid for promoting rumour, when ignorant Nigerians click on their blogs, Google Ad Sense pays them per click. Hence they seized this opportunity to enrich themselves,” he said in his statement.
However, it is not just the high-level position of Ugorji in MMM that came to light over the last one week, there are claims that he might have made over N1bn in the last one year from MMM.
But he said that “(I) am not the administrator of MMM but one of the top guiders of this great community.”
As if to address the issue of how much he had made from the platform, he later states, “every guider in the MMM community has a limit to withdrawal and I have never made withdrawals above my limit.” However, he maintained that the freeze on Mavro (MMM version of credits), was just a measure to prevent the actual collapse feared by participants.
According to him, that MMM has collapsed is far from the truth.
He said, “The reason for this measure is evident. The system needs to prevent any problems that might arise during this festive season and this measure will be cancelled once the festive season comes to an end.
Frozen of mavros does not mean MMM has stopped operations or crashed rather the system has adopted this measure to avoid any mishaps. The support system are working on issues to enhance the effectiveness of the community.”
But it is unclear whether his statement has done much to restore confidence of Nigerians in the platform. Some say all the participants need to learn as lesson is to look at how the scheme fared in other countries.
An audio message circulated by one of the ‘guiders’ in the scheme known as Alpha Romeo, indicates that at least three million Nigerians are participating in the scheme, a fact that puts in focus how massive the impact of an eventual collapse would be to Nigerians.
To put the impact in context, a Facebook user, Peter Sunday, shared a personal experience of the reaction of a policeman to the action taken by MMM administrators.
He said “We need to form prayer team to pray against suicide because of this MMM halt o. This is real. I entered a vehicle with a Mopol (mobile police) man who had been on duty since Friday and he was not aware of the MMM freeze.
“He overheard the driver and one of the passengers talking about MMM crash. All of a sudden he screamed ‘Haaaaaah! MMM crash? Haaaah. I dash money dem keep for my hand, I take put for MMM oooooooh. I am dead.’ The Mopol man then cocked his gun.”
Compared to Nigeria’s over three million participants, when MMM Zimbabwe collapsed few months ago, only about 66,000 participants fell victim. Still, it generated a nationwide heartache as many had sunk their life savings into the scheme.
A report by a Zimbabwean news website, TechZim, drew a comparison between the way the platform collapsed in the country and what is happening in Nigeria.
“In Zimbabwe, the first sign of MMM Zimbabwe coming to a halt was when the Reserve Bank effectively distanced itself from any activity outside of its regulatory scope. They were powerless to either stop MMM Zimbabwe or help those who could potentially be affected by its subsequent demise. Like in Nigeria, government agencies in Zimbabwe condemned the scheme at all fronts.
“This made a lot of MMM Zimbabwe participants wonder what exactly was going on to have made the Reserve Bank come out and say they have nothing to do with MMM, confidence still remained but eyebrows started to get raised.”
TechZim reports that rumours of a possible system crash instigated a wave of panic withdrawals which led to a pressure in the system forcing the administrators to reduce the worth of Mavro by 80 per cent. It started in April 2016 with the reduction in the Mavro growth rate from 50 per cent to 30 per cent and on to 20 per cent. Growth rate offered by MMM Nigeria is currently 30 per cent.
At the end of the day, the amount of PHs (Provide Helps)could not meet up with the GHs (Get Helps). That was the final straw for MMM Zimbabwe.
Almost every social media space in Nigeria currently hosts arguments for and against MMM. Many genuinely believe that the freezing of accounts was a step in the right direction considering the massive cashing out (or ‘GHing’ in MMM-Speak) for the festive period, which might collapse the system.
But others have said the January reopening would not happen considering what happened in other countries such as South Africa and Zimbabwe, where the scheme has collapsed.
A South African, ThendoStivo, who shared his views on Facebook, said those expecting that the freeze on Mavros (MMM credits) would be lifted in January should probably not hold their breath.
‘’You should have learned from your brothers and sisters here in South Africa. Our old Mavro money is gone as we speak and MMM is at silence as we speak (sic) so watch out for this Ponzi scheme, I have also learned my lesson here in South Africa. But at least it is not too much money that I lost (sic),” he posted on Facebook.
When MMM collapsed in South Africa, the administrators also blamed it on the panic orchestrated by untrusting media in the country. In fact, they accused the media of “persecuting” the platform.