All The Details Of UBA’s Outperformance Of All Banking Stocks 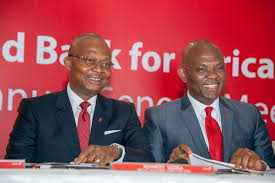 United Bank for Africa (UBA) Plc outperformed all banking stocks in the first quarter of 2017 with a share price appreciation of 28.22 per cent. It had recorded the second highest price gain of 33.1 per cent in 2016, just slightly under three points behind Guaranty Trust Bank (GTB), which led the sector with 35.9 per cent.

Altogether,
UBA’s share price had grown by more than 60 per cent in the past 15 months, the highest by any bank and one of the few bright spots in the long-running depression at the stock market. Average return at the Nigerian Stock Exchange (NSE) in the first quarter of 2017 was negative at -5.05 per cent.

The NSE Banking Index was down by 0.03 per cent while the NSE 30 Index, which tracks large-cap stocks, was almost on the average with a three-month return of -4.93 per cent. In  2016, the stock market had recorded a full-year average return of -6.17 per cent, equivalent to net capital loss of N604 billion.

Only 19 companies, including three banks, recorded a capital gain of 20 per cent and above in 2016, underlining the general downtrend that marked price changes during the period. A long-running depression had seen quoted equities losing N4 trillion in the past three years, including N1.75 trillion and N1.63 trillion in 2014 and 2015 respectively.
UBA’s share price appears to be riding on the crest of positive analysts’ reviews. There is almost analysts’ consensus on the attractiveness of the UBA. Investment research and rating firms such as Renaissance Capital, CSL Stockbrokers, Fitch and Augusto among others had maintained that UBA has strong fundamentals to support substantial price appreciation. UBA Group’s audited report and accounts for the year ended December 31, 2016 supported the positive view of its earnings potential, in spite of the Nigerian economic recession.

On the back of improved earnings, the bank increased dividend payout to shareholders by 25 per cent, further enhancing the total real return on investment built up significantly by capital appreciation. Shareholders received final dividend payment of N19.9 billion for the 2016 business year, in addition to N7.3 billion interim dividend paid after the audit of its 2016 half-year results. With this, shareholders received a final dividend per share of 55 kobo in addition to interim dividend of 20 kobo, bringing total dividend for the 2016 business year to 75 kobo as against 60 kobo paid for the 2015 business year. A dividend yield of more than 14 per cent further placed UBA within the top yields at the stock market. This surpassed the 13.01 per cent coupon on the two-year tenored Federal Government National Savings Bonds.

Most analysts have rated UBA Group high on its fundamentals. “We note improvement in profitability and the bank’s good asset quality. The rating takes into cognizance the weak macroeconomic climate on the banking industry’s asset quality, in which we do not expect UBA to be excluded. Nonetheless, we note positively its diversified geographical reach, which will cushion to an extent the impact of the weak Nigerian economic climate,” Agusto & Co stated in its recent credit rating report.

Also, Fitch International, one of the foremost global rating agencies, in its latest report affirmed and upgraded its ratings for the bank citing strong earnings and asset quality. Fitch affirmed UBA’s viability rating at “B” as the pan-African banking group continues to sustain its benchmark asset quality and strong profitability amidst industry and macroeconomic challenges. UBA is one of the few banks with strong risk management framework, which has helped kept non-performing loans ratio at a moderate level of 1.74 per cent as at the end of March 2016.

The board and management of UBA said the banking group is well-positioned for sustainable long-term growth that will continue to ensure commensurate returns to shareholders. Chairman, United Bank for Africa (UBA) Plc, Mr. Tony Elumelu, noted that most African countries were implementing policy measures that should help stimulate inclusive economic growth, ease macro pressures and lower the cost of doing business. According to him, while Africa has experienced a difficult period; the UBA group welcomed 2017 with renewed optimism as it truly believes that “Africa is Rising”.

“Our pan- Africa operations have delivered on the promises we made at the outset of our growth strategy and we are beginning to reap the benefits of one the largest network in Africa. As we navigate the fast changing market place, we are increasingly digitalising our core business, as we explore new markets and means of embracing customers experience, gain increased share of customers’ wallet and offer new services. I am very optimistic that we will sustain the strong growth trajectory, as we continue to gain market share, leveraging our core values of enterprise, excellence and execution,” Elumelu outlined.

Group managing director, United Bank for Africa (UBA) Plc, Mr. Kennedy Uzoka also assured that the bank is optimistic of continuing growth in the years ahead.

“The 2017 outlook remains positive in most of our markets. We are not aware unaware of the macro challenges, competition and constantly changing customer preferences.  We will further sweat our unique Pan Africa platform to improve productivity, extract efficiency gains and grow our share of customers’ wallet across all business lines and markets,” Uzoka said.

According to him, as the banking group continues with its customer first philosophy, shareholders can look forward to better performance, especially with the outlook remaining positive in most of the group’s markets.

“We will build on our strong governance culture, zero-tolerance for infractions and transparency in furthering our frontiers of leadership in the African market,” Uzoka said.