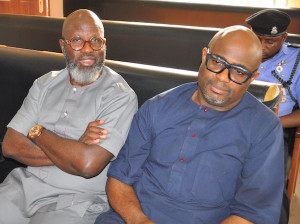 The Chairman of Miccom Cables and Wire, Chief Michael Ponnle is not in a happy mood.

The septuagenarian who lost his wife and confidant, Olufunke just some years ago is angry with the arrest and detention of his first son, Abiodun by
biodunthe EFCC over an alleged subsidy scam.

The younger Ponnle was recently arraigned alongside Adegbite Adetoye with Origin Oil and Gas Limited before Justice Silvanus Orji of the FCT High Court Apo, Abuja on an 11-count charge of fraud and abuse of Petroleum Support Fund to the tune of N735million.

Adetoye and his co-accused allegedly conspired and fraudulently obtained the sum of N735, 132, 076.18 (seven hundred and thirty five million, one hundred and fifty two thousand, seventy six naira, eighteen kobo) from the federal government as payment for the importation of 15,000mt of premium motor spirit (PMS) which they claim to have purchased from Vitol SA and imported into Nigeria through MT Silverie.

A source revealed to papermache that since the arrest, the billionaire father of Biodun has been in pains wondering what life is giving back to him in his old age. He lamented ‘why Biodun? Not at this time’.

Another source hinted that the crime could attract a minimum of ten-year jail term if the accused is found guilty thus explaining why his aged father who doesn’t joke with his family is in pains.

The accused is not new to financial scandals, he was fingered some years ago in an arms deal scam where his company Berwick Integrated Limited was named as part of the beneficiaries of the arms deal scandal involving former National Security Adviser, Sambo Dasuki