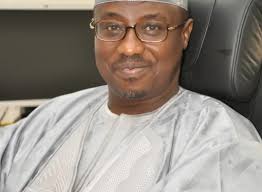 Like tiny droplets that precede the hammering rain, the guests meandered into the rustic ambiance of Misau, Bauchi State. But unlike the proverbial rain droplet, each guest loomed large in reputation and acclaim thus making the assemblage a gathering of nobles, political and oil business titans. They had all travelled to Misau in honour of Maikanti Baru, incumbent MD of the NNPC,
yesterday

But Baru was not marking his birthday nor was he throwing a high-octane bash to mark the grand opening of a country home, rather the he was burying his dear mother, Hajia Fatima Baru.

Yesterday, Saturday, April 22nd , Misau literally stood still as the crème of Nigeria’s high society thronged its rustic neighbourhoods to attend the grand ascension of Baru’s mother to the afterlife. Expectedly, it was a star-studded event. All the rich men and women in Nigeria trooped out to pay their last respects to Hajia Fatima.

The people of Misau woke up to witness the grand procession of Hajia Fatima’s funeral. Hajia did not.  Woke to find its darling dead, stolen away during the night by an inexplicable fate.

There is no gainsaying she was the Queen of the Baru clan and a doting mother to her children, a title no monarch could claim. She loved her children very deeply and was prepared to sacrifice her happiness for theirs.

The natives had never been good at silence — they are never known to mourn wordlessly hence they are hardly the type that expressed intense emotions through a hand on the shoulder or a pat on the back— but on April 22nd, they surpassed themselves. Bauchi silently mourned as the nation’s dignitaries thronged its beautiful innards to pay tribute to the beloved mother of one of their own.

The quiet amplified the sounds of the cortège as it set out to Hajia Baru’s final resting place: the rumble of wheels on tarmac, the click of shoe heels on concrete and the soft thud on mother earth tolled at listless intervals.

The funeral ceremony was in every respect adjudged a great success as it drew a perfect blend of A-listers ranging from technocrats, industrialists to young professionals who are friends and associates of her son, Baru.

But, unlike several billionaires and public servants of his class, Baru shied from turning his mother’s funeral into an avenue by which he would flaunt his wealth and make an emphatic social statement; he didn’t turn it to a festival of wealth and testament to his clout and high office.

In a precedent-shattering ceremony that was at once sorrowful and uplifting, Hajia Fatima Baru, was remembered as a woman of unimpeachable nobility whose life of compassion and style transcended the familiar and often pedestrian vanities of humanity.