It was the gathering of who is who in the country football at the final  of this year’s edition of the Delta State Principal’s Cup sponsored by Zenith Bank came to an end in Ozoro, Delta State at the weekend.

In the final match, Mastercare International School, Asaba, defeated Idjerhe Grammar School 2-1 iat the Ozoro Polytechnic Stadium, Ozoro, Delta State.
However, the ex-internationals were led to the final by Henry Nwosu, who is the youngest Nigerian player to win the African Nations Cup when he was picked straight out of St. Finbarr’s College to play for the national team while still under 17 years old.

Others who graced the occasion were Victor Ikpeba, Victor Agali, Ifeanyi Udeze, Samson Ozogula, Prince Afejuku and Edema Fuludu, who are all products of the competition.

Apart from the ex-internationals, the governor of the state, Ifeanyi Okowa and the president of the Nigeria Football Federation, Amaju Pinnick, were at the stadium to cheer the youngsters.

Speaking to our correspondent, Nwosu was full of praises for Zenith Bank for bringing back the competition after 28 years as he advised the children to be good ambassador of the state.

“Zenith Bank has done well for our children by bringing back the Principals’ Cup,” he said.

“It is important to combine academics with sports because it will definitely help the children. The level of commitment of the team has shown that the future is bright.”

It was an emotional moment for former African Footballer of the Year, Ikpeba, who described the final as best of soccer artistry.

Ikpeba who hailed from Delta State also applauds Zenith Bank as he advised the financial institution to extend the sponsorship to other sports.

The governor in his remarks announced that no school should be registered again without sporting facilities while also announcing the sum of N200,000 each for the winner of the Most Valuable player, Golden Gloves and the Highest Goal Scorer of the competition.

The CEO of Hideaplux Limited, Warri, the organisers of the event, Tony Pemu, said it was a glorious show that ended well.

“We cannot ask for more. We had a good take off, a remarkable competition altogether and fantastic ending too,” Pemu said. 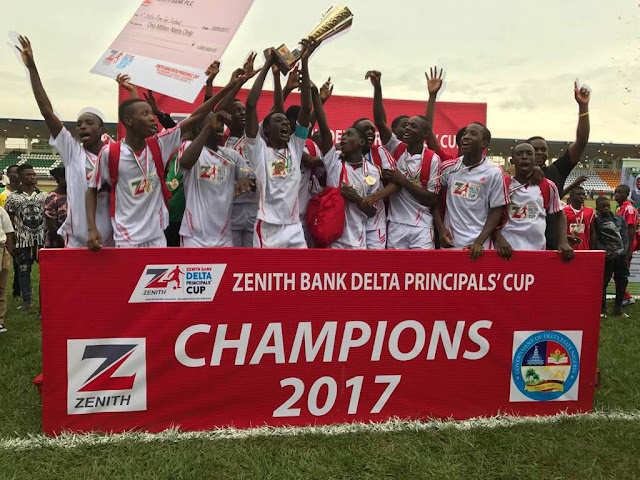