‘’We Are Not Interested In Igbo Presidency’’ Massob Declares 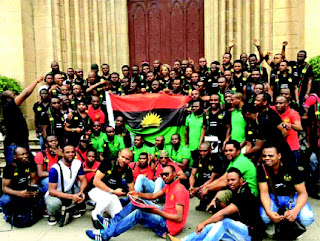 The Movement for the Actualisation of the Sovereign State of Biafra has disagreed with the National Chairman of the All Progressives Congress, Chief John Odigie-Oyegun, over his
statement on Igbo presidency.

Odigie-Oyegun had, last week in Enugu, while calling on the people of the South-East to vote for the APC, said the party would guarantee their quest for an Igbo president.
But MASSOB’s National Director of Information, Mr. Sunday Okereafor, described Odigie-Oyegun’s statement as laughable, stating that the Igbo were not interested in Nigeria’s presidency.
Okereafor, who spoke with The PUNCH in a telephone interview on Thursday, explained that MASSOB was neither interested in the APC nor the Peoples Democratic Party, adding that the movement’s struggle was for the Igbo to have a sovereign nation.
He claimed that Nigeria had never planned to have an Igbo man or woman as the President of the country, wondering why the APC national chairman would make such a statement.
Okereafor recalled that former Igbo leader, the late Chukwuemeka Odumegwu Ojukwu, and the ex-governor of Abia State, Chief Orji Uzor Kalu, spent a lot of their resources trying to become the president of the country to no avail.
He added, “The claim by the APC national chairman that the party will use Igbo Presidency to finally kill the PDP in the South-East is laughable. Nigeria has never had Igbo presidency in its agenda. So, Igbo man can never be President in Nigeria in 500 years.
“The Igbo elite should understand this. MASSOB does not believe in any political party in Nigeria. We believe in the freedom of Biafra and not the campaign for the Presidency to come to a person from Igbo extraction.”