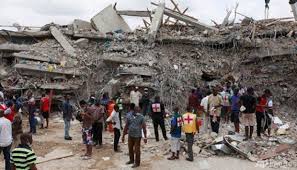 A Lagos High Court  sitting in Igbosere on Thursday issued a warrant of arrest on one of the 10 persons standing trial for their involvement in the March 8, 2016 collapse of a building in Lekki Gardens.
At least
five persons were killed in the incident.

Justice Sybil Nwaka ordered the arrest of Shola Olumofe, who is the second accused person in the case.
The court had earlier dismissed Olumofe’s motion challenging its jurisdiction.
Also listed in the case are – Richard Nyong, Henry Odofin, Molabake Mortune, Omotilewa Joseph, Marius Agwu, Lekki Gardens Estate Limited, Get Too Rich Investment Limited, HC Insight Solutions Limited. and Artech Insignia Limited.
The judge adjourned the accused persons’ arraignment till June 14.
The accused persons, excluding Olumofe, were brought to court on May 24 but were not arraigned because of Olumofe’s application, challenging the court’s jurisdiction to try the case.
Olumofe, through his counsel, Chief Richard Oma Ahonaruogho, challenged his inclusion in a six-count multiple charge of failure to obtain building approval and involuntary manslaughter.


thenation
Posted by MAN ABOUT TOWN at 1:42 PM