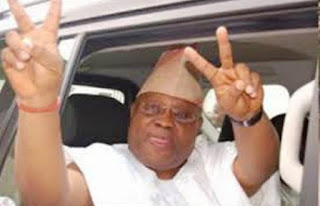 If at the beginning of April, a seer told Ademola Adeleke, US-based businessman, that he would be a member of the upper chamber of the national assembly, he might have disbelieved it.

One, he has not vied for any known public office, two, Isiaka, his elder brother was doing very well and even coasting to becoming the next governor of Osun state. Three, the man who was not in the country when his brother died suddenly on April 23 had perhaps
thought that he would return to his base after paying last respect, but all that is now history.

Adeleke is the senator who would now represent Osun west senatorial district at the red chamber. Like any election, the winners are rejoicing while those on the other side are thinking about what they could have done better.
Here are four possible reasons why the Peoples Democratic Party (PDP) snatched a senatorial seat from the ruling party.
SYMPATHY OVER ISIAKA’S DEATH

The late senator who represented Osun west was a very popular figure. Serubawaon, as he was known in political circles, had a solid political structure. Many of his supporters did not see his death coming, hence the shock that greeted the sad news.
Ede, his hometown, literally caught fire when people learnt of his demise. The man was so healthy that he attended a funeral ceremony some few hours to his death. Perceived opponents were not allowed to attend the burial of Isiaka. A deep loss it was to many, so when the family decided to pick one of his younger brothers as his replacement, supporters of the deceased lawmaker just transferred the love to the new senator.
In fact, the PDP candidate also won over some people who were not in the camp of his late brother. Knowing how gullible the minds of people are, political associates of Adeleke sold the narrative that the only way to shame those who could have killed Isiaka was to elect his younger brother.
VOTING POPULATION

Adeleke’s town has two of the 10 local governments in the senatorial district – Ede north and Ede south. While Hussain has just Ejigbo. In Ede, the goodwill of Adeleke’s brother worked for him, but Hussain didn’t really enjoy that factor, rather some of his people complained about the lack of access to his ‘fountain of abundance’.
They said he did not do enough when he was at the senate between 2011 and 2015. This reflected in the result of the election. In Hussain’s polling unit 1, ward 3, Ejigbo local government, APC had 152, while PDP trailed with 148, leaving a marginal difference of four. But Adeleke defeated his opponent clearly at his own polling unit.
AT unit 2, ward 9 in Ede north where he cast his ballot, he polled a total of 155 votes ahead of his opponent who secured just six votes, leaving a gap of 149 votes.
In the overall result of the election in Ejigbo, both candidates split 22,221 votes, with the APC candidate winning by a narrow margin of 2,503.
But 36,991 people voted in the two local government that make up Ede. PDP took the lion share of 27,085, leaving APC with 9906.
POLITICAL ALLIANCE
Less than a week to the election, eight political parties collapsed their structures for Adeleke. The opposition parties under the aegis of the Conference of Nigeria Political Parties (CNPP) directed their members and supporters to stand by Adeleke.
The chairman of CNPP in the state who is also the state chairman of the All Progressive Grand Alliance (APGA) Popoola Olatunji declared that all the opposition political parties would ensure that Adeleke defeat Hussain.
The that adopted Adeleke were Action Alliance (AA), Social Democratic Party (SDP), Green Party of Nigeria (GPN), Alliance for Democracy (AD), Democratic People’s Party (DPP), Unity Party of Nigeria (UPN), People’s Party of Nigeria (PPN) and People’s Democratic Movement (PDM).
Rather than rising up to the occasion, the ruling party in the state lashed the parties which went into an alliance with their opponent.
Kunle Oyatomi, spokesman of the APC in Osun, had said the CNPP in Osun had turned itself into an extension of PDP. He alleged that the opposition political parties had compromised.
AREGBESOLA’S SOUR RELATIONSHIP WITH THE PEOPLE

INEC had not declared the result of the 2014 governorship election when the people of the state started jubilating that they had made the right choice in re-electing Rauf Aregbesola, the governor. So popular was he then that it took nearly 30 minutes before the crowd at the victory rally organised in Osogbo allowed him to speak on the day after the election.
Chants of ‘Aregbe! Aregbe!’ filled the air. Fast forward to a year later, the honeymoon had ended. The governor could hardly pay workers. At first, the people endured, but since hunger knows no limit, the same people who trooped to the streets to defend him against the machinery deployed by the government of former President Goodluck Jonathan, revolted against him.
Despite series of meetings and assurances, the centre could no longer hold. Imagine a situation when doctors were protesting over poor salary structure and bad working environment just three days to the election. What else could be more damning than that!
As civil servants were grumbling, pensioners also lamented. Osun started making the headlines, not for O-Yes or Opon Imo, laudable initiatives of the government, but for protests and agitation. The situation got so bad that at a point a religious body donated food to some workers.
There were also complaints that the current administration was slashing the salary of workers, but no concrete step was taken to address these issues.
Many voters went into the election with anger. Iwo, the headquarters of Osun west, has been a stronghold of the APC for years, but Hussain could not even secure a resounding victory in this area, as Hussain only had 342 votes above Adeleke.
The APC must go back to the drawing board if it means business in the 2018 governorship election, but for Ali Modu Sheriff, chairman of the PDP, the result of this election is a releif, at least for now.