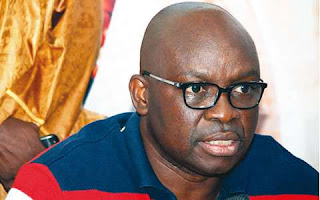 Ayodele Fayose, governor of Ekiti state, has launched his presidential campaign on social media.
The governor
opened a Facebook page and a Twitter handle ahead of the 2019 general election.

On the page, with the motto – ‘Strong, Reliable and Rugged’ – Fayose called on Nigerians to “behold their next president.
He described himself with words like: ‘Pro Masses. Accessible. Ekiti State Governor. Chairman, PDP Governors’ Forum. Husband and Father.. He’s Peter (The Rock)’.
His Twitter handle, @Oshoko2019, was dormant as of press time.
This development might be part of Fayose’s steps to snatch power from President Muhammadu Buhari, whom he never ceases to critique