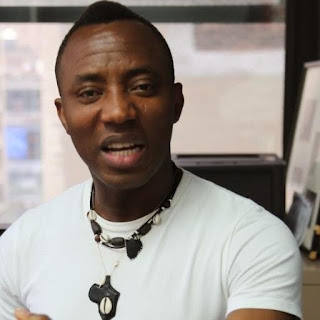 An Ilorin High Court, presided over by Justice Adeyinka Oyinloye, has reportedly frozen the bank accounts of online newspaper, Sahara Reporters, published by Omoyele Sowore.
It will be recalled that
Senate President, Dr Bukola Saraki had won a N4 billion judgement against Sahara Reporters which they failed to pay.

Saraki therefore applied for and got a temporary garnishee order against Sahara Reporters’ accounts at UBA and GTB.
The accounts combined are believed to have about N236million
Saraki, had, through his lawyer, Babatunde Olomu, asked for the intervention of the court following a series of libelous stories published against him on Sahara Reporters between September and December 2015.
Both Sowore and Sahara Reporters were joined as defendants in the suit marked as KWS/23/2017.
It was gathered that Sowore has not been able to access the bank accounts since the court’s decision.
On Wednesday, June 28, the court had ruled that Sowore pay a sum of N4 billion as damage to Saraki for the alleged libelous publications.
Lamenting the development in a statement, Sowore said Sowore he is yet to obtain a copy of the court order.
He stated: “We have the reason the “Jankara” Judge in Ilorin procured by Bukola Saraki could not produce the record of proceedings in his own court.
“The Chief Judge of Kwara state upon receipt of a copy of Femi Falana’s letter requesting the records has found out that the “records” were incomplete.
“For instance, the judge, Sikiru Oyinloye had adjourned his last sitting of the case to affirm “proof of service” but along the line, lawyers loyal to Saraki, led by Yusuf Alli (SAN) approached him, handed him a written judgement and told him to go ahead and give a judgment awarding N4billion against SaharaReporters. When Oyinloye told them it will be tough for him, they promised to “handle the consequences” using their connection and contacts within the Nigerian judiciary. At the point of giving that ruling, Oyinloye had not even ascertained proof of service of the summons of the purported libel lawsuit against SaharaReporters and myself, but yet he creatively issued a judgment without fulfilling the processes he laid down in his previous rulings on the matter.
“Our lawyers have now been grudgingly told to come to get the available “record of proceedings” by 11 am tomorrow.
“As you all know, this is a long existential battle to liberate the robbed and the oppressed against whom a crooked judiciary and rogue lawyers have been arrayed over the years in every corner of our nation and which have long been championed by our collective efforts.
“But rest assured that even the most noxious of political crooks are dead scared of the power of interaction of the oppressed that could remotely provoke action.”
However, Saraki has also vowed not spare any legal efforts and expenses, both in Nigeria and abroad, necessary to recover every kobo of the cost awarded in his favour from Sowore.
“The money will also be used to support genuine publications whose owners are struggling to pay salaries of workers or meet their ever rising running cost. Part of the money will also be channelled to help lawyers who have been providing pro bono services to litigants, particularly, on cases bothering on enforcement of fundamental human rights,” a statement by the Senate President said.