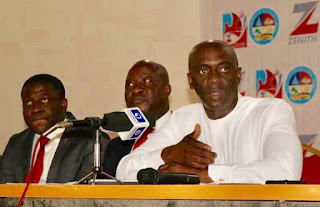 All is set for the second edition of the Delta State Principals Cup football competition for all secondary schools sponsored by Zenith Bank.

At the
media conference of the Season 2 of the competition on Thursday, Governor Ifeanyi Okowa affirmed his resolve to give all young Deltans a platform to excel in their various areas of specialization and to expose their talents in the state to the global community.

The Delta State Commissioner for Basic and Secondary Education, Chiedu Ebie, who on behalf of the governor said the opening ceremony is scheduled for November 1, 2017 at the St Patrick’s College, Asaba while the final is scheduled for February 2018 at the Ozoro Polytechnic Stadium.

Stressing that the revival of the Principals Cup was one of the programs outlined by the Governor towards enhancing the grassroots sports developmental drive of the state, Ebie said that the Okowa administration was keen on redirecting the focus of young Deltans to meaningful ventures.

He commended Zenith Bank for partnering with the state and urging the private sector to also partner with the government on its laudable programs towards giving the youth a brighter future.

Deputy Managing Director of the Zenith Bank, Mr Ebenezer Onyeagwu, represented by Mr Lucky Ighade, the Deputy General Manager Asaba, assured of the bank's determination to continue its partnership with the state, saying the Principals Cup was a veritable tool for engaging the youth in productively.

He said the Zenith Bank Delta Principals Cup was a flagship program of the bank aimed at giving back to society as well as providing the youth with a better future.

Ighade said the tournament was part of the bank’s ways of developing grassroots sports in the country with the hope that future stars would emerge therefrom to represent the country in international football competitions.

The Chairman of the Delta State Sports Commission, Chief Tonobok Okowa, represented by the Director-General, Mr Victor Onogagamue, assured that the commission will give necessary technical support to the programme