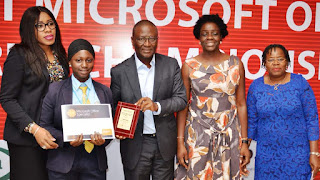 Zenith Bank says it would continue to promote efforts that improve ICT knowledge and penetration in Nigeria through its sponsorship of Nigerian students in the global Microsoft World Championship.

The bank’s Group Managing Director, Mr. Peter Amangbo, said
this in Lagos on Wednesday at the Annual ReadManna Award and ICT Exhibition where prizes were presented to the Nigerian winner and participants at the Microsoft Word Championships.

The 2017 edition of the Microsoft Word Championship was held in Disneyland, California, U.S.A, where a Nigerian student, Katrina Eta, won the third place. The bank has partnered with ReadManna since 2010 for the Nigerian championship and since 2014 for the world championship.

Amangbo said that the bank was doing this through its commitment to the sponsorship of Nigerian students at the global competition, in line with its corporate social responsibility which has the promotion of ICT as an empowerment tool at its core.

Amangbo, who was represented by Mrs. Wunmi Ogunbiyi, a General Manager in the bank, said that the bank's partnership with Readmanna, the organisers of the championship in Nigeria, has the potential to further improve ICT knowledge among Nigerian students.
“We will continue to engage in partnerships that will positively impact our people and our country in the short, medium and long terms.” Amangbo said.

He said that the bank was happy with the increased participation of Nigerian students in the global competition and promised that the bank would not relent in its efforts.

Amangbo also said: “To this end, Zenith Bank is committed to sponsoring an expanded Nigerian competition involving more schools as well as supporting the Nigerian contingent to the 2018 Microsoft World Championship.

“Our objective is to see how we can support the initiative to involve more children so as to fast-track the penetration and growth of ICT in Nigeria,” he added.

Katherine Eta, the Nigerian student who came third in Microsoft Word 2017 Championship, said she aspires to be the best world Microsoft office specialist.

The 16-year-old student of Childvilie School, Ogudu, Lagos, said she was happy to make Nigeria proud.

The girl, who said she planned to study Computer Engineering, said "my aim is to be the best in the world and I will not relent on my efforts.”

"I feel great to have represented Nigeria in the competition in U.S.A.

"I am also happy to come third in the competition, I'm happy to make my country, my parents, my school, myself and everybody proud.”

Eta said she planned to save the prize money won in the competition for her future education to assist her parents.

On her part, Mrs. Edna Agusto, the Managing Director, ReadManna Empowerment Initiative, said the aim of the competition was to promote proficiency in basic computer literacy aligned to global standards through ICT competitions.

"This is a global competition that challenges students to demonstrate their proficiency in the use of Microsoft word, PowerPoint and excel.

"It is open to all students aged between 13 and 22 years enrolled in an academic institution," she said.

Agusto said the national championship conducted annually by ReadManna in Nigeria was held over a period of seven months between Aug.1, 2016 and April 30 with about 882 entries from 20 Secondary Schools in Lagos, Ogun, Rivers, Kwara and Abuja.

According to her, the competition ended with 112 out of 161 students shortlisted for national competition certified in Microsoft Excel, PowerPoint and Word.

Agusto thanked the management of Zenith Bank for its decision to grow the Microsoft Office Specialist World Champion in Nigeria.

She said that this would make every Nigerian student to know the importance of acquiring basic digital skills at early ages.

Others included Samantha Onyinye of Aduvie International School, Abuja, who was presented with N20,000 can gift, and Mychal Oluwatumininu of Day-Waterman College, Abeokuta, who was given N30,000 cash gift.