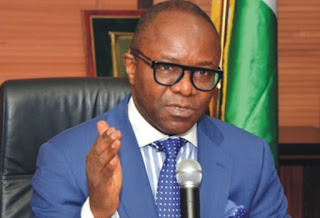 A advocacy group, Accountability Vanguard (AV), in a statement signed by its spokesperson, Comrade Ojelabi Victor, has roundly condemned the attempt by the NNPC and some politicians to blackmail and denigrate the Minister of State for Petroleum Resources, Ibe Kachikwu, on the allegations he leveled against the NNPC.

Despite an attempt by
the state-run firm to try to dismiss, and render irrelevant the allegations leveled against it by the Minister of State for Petroleum Resources, Ibe Kachikwu, Maikanti Baru led body failed to address the key issues raised by the minister.

Recall that Kachikwu's memo to the Nigerian president, which was allegedly leaked, raised quite some dusts that bordered around insubordination, corrupt practices and abuse of contracting process.

The group therefore finds unfair and at the same time interesting for anyone to regard Ibe Kachikwu's allegations as that of a derailed man, when Baru, in an attempt to defend the indefeasible only confirmed part of the allegations, while most were mainly ignored.

What Mr. Baru forgot to factor in in his jaundiced unhurried response was that the position of the NNPC board's chairman has been ceded to the Minister of State for Petroleum Resources, Ibe Kachikwu!

The act setting up the state-run oil firm empowers the president to delegate someone as the chairman of NNPC board, despite the fact that the president can still act in same capacity without invalidating the position of delegated.

Looking at this holistically, where has Kachikwu gone wrong in his allegations? Let him be!

Another issue raised by in the leaked memo was that of corruption and abuse of contracting processes. This was not included in the NNPC's response to the minister.

This, however, did not come as a surprise because the issue of insubordination addressed was secondary, the primary issue which borders on fraud is the contracting process. It's unfortunate that a firm of the government expected by the act setting it up to be apolitical, like every other sectors in Nigeria, has fallen to corruption.

It is high time we understood that corruption doesn't come about only when money is misappropriated but also where fairness and openness are compromised.

According to the NNPC handbook on award and execution of contracts, the organisation must be open, economical and transparent in accordance with the provisions of the law and without regard for self interest.

By reviewing what the minister alleged, he specifically pointed out that '$26billion was awarded without due process'. If Baru's as NNPC has done no wrong, why was this part and that of personnel appointments omitted in his response?

Until his appointment as Minister of State for Petroleum Resources in 2015, Mr. Kachikwu was the Executive Vice Chairman and General Counsel of Exxon Mobil (Africa).

He had earlier served as the GMD of NNPC until July 2016.

A first class graduate of law from the University of Nigeria, Nsukka, and the Nigeria Law School, he also holds masters and doctorate degrees in law from the Harvard Law School.

He started his working career with the Nigerian/American Merchant Bank before moving on to Texaco Nigeria Limited from where he joined Exxon-Mobil.
Posted by MAN ABOUT TOWN at 6:45 PM