Abdulsamad Rabiu Steps Out Of His Cocoon..Has He Finally Changed His Style? 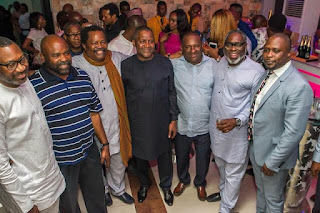 Billionaire Abdulsamad Rabiu appears to have stepped out of his cocoon.

Before now, you hardly get to catch him at any social engagement.

But within the last two weeks,
naijacelebrities.net spotted the power behind the BUA Group at two well-celebrated events.

The first was the wedding of oluwatosin, the daughter of Senate President Bukola Saraki.

Wealthy Abudulsamad was one of the major guests at the event held at Eko Hotel, Victoria Island Lagos.

Barely days later, he was also a part of the highly reported event that announced Tolani, the daughter of billionaire Femi Otedola as the latest musician in town.

These developments have resulted in raging poser, has the definition of wealth behind BUA changed his style and discarded his cloak of anonymity?
Posted by MAN ABOUT TOWN at 7:45 AM