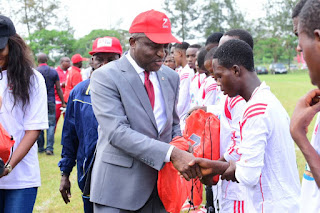 The
ceremonial match that was staged to declare the Season 2 of the competition open was highly thrilling and exciting as many top dignitaries were kept at the edge of their seats with the football artistry displayed by the players.

Excited by the quality of play at the kick-off of the second edition of the Zenith Bank Delta Principals Cup, sponsors, Zenith Bank, has declared that the event will remain in their annual projects calendar.

The assurance was given by the banks Group Head of the Delta State Zone, Lucky Ighade.

Ighale said: “With what we saw in the first edition and the quality of organization and talents on display here at the kick-off of the second edition, I am delighted to say the Zenith Bank Delta Principals Cup has come to stay.

“I will not be surprised to see some of these players in the Super Eagles sometime in the future. This competition will help to feed the national teams and that is good for Delta State and our entire society.”

The Delta State Commissioner for Basic and Secondary Education, Chiedu Ebie, said the colorful opening ceremony was an indication that the competition is ascending to the next level.

"I am happy with the opening ceremony and it has shown that Season 2 will be far better than season 1,” Ebie said