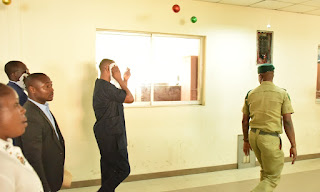 The Lagos State Government on Wednesday arraigned a brother of late founder of Guaranty Trust Bank (GTB) and property developer, David Olumide Aderinokun and a staff of the New Town Development Authority (NTDA), Balogun Adeniyi Abdul-Wakil before an Igbosere Magistrate Court over alleged conspiracy, forgery, stealing and
property fraud on parcels of land in Lekki Peninsula estimated at 2678.068 square metres.

Aderinokun, who is the husband of media personality, Stephanie Coker, was arraigned separately on an eight-count charge bordering on the offence before Chief Magistrate Olufolake Oshin, and alongside Abdul-Wakil on another eight-count charge before the same court.

Aderinokun, trading under the name and style of Davade Properties, was alleged to have conspired with others now at large sometime in February 2016 to commit felony to wit stealing, forgery and obtaining money under false pretense.

According to the charge, Aderinokun criminally “converted a piece of land measuring approximately 1764.44 square metres situate at Plot 7B, Block CBD.1, Lekki Peninsula Scheme 1, Eti Osa Local Government Area of Lagos State, property of Ocean Trust Limited for your own use and to the use of others, and thereby committed an offence contrary to Section 287 of the Criminal Law Cap C17, Vol. 3, Laws of Lagos State, 2015.”

He was said to have forged a Deed of Assignment with file number DLS/GC/110323 with the intention of using same to defraud unsuspecting members of the public.

Also, Aderinokun was alleged to have fraudulently obtained N18million from one Mrs Jumoke Fola-Alade on the pretense that he was the owner of the said property contrary to and punishable under Section 314 of the Criminal Law Cap C17, Vol.3, Laws of Lagos State.

In the other charge, Aderinokun and Abdul-Wakil were said to have conspired with others now at large to fraudulently convert a piece of land measuring approximately 913.628 square metres situated at Plot 44, Block 77, Lekki Peninsula Scheme 1 in Eti Osa for their use. 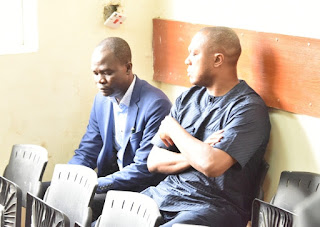 The property in question, which was registered as Number 96 at page 96 in Volume 1993p, belonged to Mr Ben Adebisi Oyekunle and Mrs Bukola Taiwo Oyekunle.

In one of the counts, Aderinokun and Abdul-Wakil and others now at large were said to have “On or about the 3rd of March, 2012 at Lekki Area of Lagos State in the Lagos Magisterial District, possessed a fraudulent document (Deed of Assignment registered as No 91 at page 91 in Volume 2399) knowing fully well that the document was false and presented same at the Lagos State Land Registry, Alausa, Ikeja for registration and thereby committed an offence contrary to Section 320 of the Criminal Law Cap C17, Vol.3, Laws of Lagos State, 2015.”

Specifically, Abdul-Wakil was said to have used official information at his disposal to fraudulently convert the said land for his own use contrary to the law.

After the charges were to them, the defendants pleaded not guilty, while their lawyers - Stanley Imhanruor and Sunny Ogoh urged the court to grant them bail on liberal terms.

The lawyers hinged the bail application on the grounds that the defendants had no criminal records and were appearing in court for the first time, adding that the offences for which they were charged were bailable.

On his part, the prosecutor from the Lagos State Ministry of Justice, Dr Babajide Martins applied that the defendants be remanded in custody, as well as a date for trial.

He said the application for remand was necessitated by the fact that the defendants were allegedly involved in a well-orchestrated land fraud coupled with the fact that others connected with the crime were still at large, and that releasing them on bail may jeopardize the case.

In her ruling, Magistrate Oshin admitted Aderinokun and Abdul-Wakil to bail in the sum of N10million and two responsible sureties in like sum. One of the sureties must be a civil servant not below grade level 16 in the State Public Service and must get approval of the Head of Service to stand as surety.

Oshin also ruled that the other surety must be a staff not below managerial level in a reputable organization and if self employed must show evidence of company registration with the Corporate Affairs Commission (CAC) with a minimum balance of N1million and tax clearance.
“The defendants are to deposit their valid international passports to the court, while the official and residential addresses of the sureties are to be verified by the prosecutor,” Magistrate Oshin held.

The defendants were also ordered to be remanded in Kirikiri Maximum Security Prison pending the perfection of their bail conditions.

The matter was subsequently adjourned to February 2, 2018 for trial.