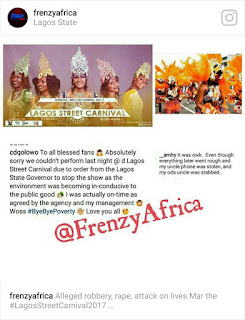 The first leg of the 2017 Lagos Street  Carnival staged in Ikeja didn’t go as planned.

The area boys reportedly had a ‘’free day’’ at the Oba Akran Avenue venue of the event which held on Sunday December 3.

Those who resisted were stabbed. And some just stabbed to create fear before they were robbed.

There were alleged to be cases of rape.

This is despite Governor Akinwunmi Ambode’s attempt save the day when he saw indications of what was to come.

He ordered that the show be stopped as the enviroment was becoming ‘’unconducive’’ for  fun lovers.

But that might have helped to reduce numbers of victims, but it didn’t stop the spree of robbery attacks and other vices that eventually took hold of the venue.

CDQ, one of the musical acts billed to perform - obviously concerned about his fee -later took to his instagram page to explained he was on time based on agreement with his management and the agency that contracted him.

And confirmed he couldn’t perform because Governor Ambode ordered the show stopped because the enviroment was becoming ‘’in conducive’’.

Another instagram user, amphy stated that though the show was ok, ‘’everything later went rough and by uncle phone was stolen and oda uncle was stabbed’’.

This development is far cry from past editions where security was optimum and all the area boys ‘’kept in check’’.