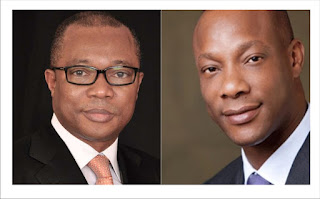 Contrary to what many thought was just a mere tiff that would vaporise with time, the cold war between Fola Adeola, former Guaranty Trust Bank CEO and the incumbent, Segun Agbaje, has snowballed into frightening intensity.
In fact, insiders say
it is burning with heat as both parties are plotting, scheming and throwing barbs. At the moment, both don’t see eye to eye much less talk. Details of their disagreement have been surprisingly shrouded in secrecy.

Adeola co-founded GTB with his bosom friend and successor, late Tayo Aderinokun. He led the bank from inception to the time he retired in 2002. In retirement, Adeola concentrated on his FATE foundation and politics, during which he was vice presidential candidate and running mate to Nuhu Ribadu in the 2011 presidential election while Agbaje steped into the driver’s seat when Aderinokun died in June 2011. Things have now fallen apart between the two bank whizzes.
However sources close to the duo have dismissed the rumour and what they term malicious speculations, claiming they are figments of the imagination of agents of mischief desperately trying to sully the reputation of the GTBank head honchos and impair the bond of their friendship.
Adeola and Agbaje, they claim, are two honourable leaders of GTBank whose loyalty to each other and the new generation banking enterprise is unrivalled. Adeola served as pioneer Managing Director and Chief Executive at GTBank for 12 years