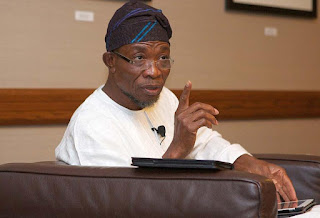 On the heels of revelation Governor of Osun state, Rauf Aregbesola as picked Asiwaju Bola Tinubu’s cousin Gboyega Oyetola as his successor - the alleged plot to execute the plan is now exposed.

According to information available,
the political leadership of the All Progressives Congress has been fingered as the ‘’executor’’.

The Osun APC Leader is alleged to be working on a move aimed at altering the list of party executives in favor of its preferred candidate ahead of the 2018 governorship election in the state.

Feelers from the party across the state has indicate that the state governor, Ogbeni Rauf Aregbesola and some of his trusted aides including the likes of Biyi Odunlade for Ife Zone, Gbenga Ogunkanmi for Ayedire and Rasak Salinsile for Iwo Zone, Kolapo Alimi and Bashiru Ajibola for Osogbo/Irepodun, and Victor Fatoki have been alleged to be behind the scheme.

Fatoki, it would be recalled, is the Personal Assistant to the State Chairman of the party, Prince Gboyega Famoodun, was given three council areas to work on, while Idowu Korede, the State Commissioner for Sanitation, has been given the task of dealing with list of members from Ijesa axis of the state.

To achieve this, prominent members of the party have been invited in recent times on several occasions to Osogbo, the state capital, with juicy offers including appointments as Senior Special Advisers to the Governor among others.

At one of the meetings, attendees were given lists of executive members in their respective areas to work on.
Specific orders were given to remove names of deceased members, as well as those that had crossed to other political parties.

Those invited to those meetings were specifically instructed to ensure that names of members that are favourably disposed to a particular governorship aspirant be instantly removed.

The next stage is to place to place all the approved exco members on special salaries and other allowances to ensure the emergence of the governor's anointed candidate during the forthcoming party governorship primaries.