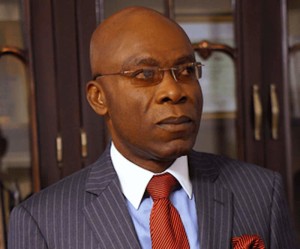 Marry a man’s daughter and he becomes an in-law. Marry his mind as well and he becomes a loyal friend and partner for life. Leo Stan Ekeh, the Chairman of Zinox Computers understands this principle of knitting a close family even closer. Hence the recent appointment of Siji Ijogun, the father-in-law of his daughter Gozy, as the
substantive chairman of Konga, the company he acquired recently.

With this brilliant move, Leo Stan Ekeh has ensured that the management and control of the eCommerce giant Konga stays in the family. It will be recalled that Zinox Group had bought the online shopping platform for a reported $10 million in a move that injected not a little dose of excitement into the eCommerce industry. Zinox under the leadership of its able chairman is poised to give the other players in the multi-billion-dollar industry a run for their money.

Apart from being tied to the Ekehs through his son’s marriage, Olusiji Ijogun, the frontline corporate guru, is a formidable name in his own right. A household name in finance and management, his brilliance over three decades in the industry has landed him several high profile jobs before this one. He has served as Divisional Managing Director, UAC Foods, Group Finance Director, UAC of Nigeria Plc, and Commercial Director, Lever Egypt. The affable dude who currently serves as the CEO of Innodel Consulting will officially resume at Konga on April 1.

Those in the know claims Ekeh’s choice of his daughter’s father-in-law is designed to kill two birds with one stone. It puts Konga in the hands of someone close that he trusts and also leverages on Siji’s incalculable wealth of experience to reposition Konga as a force to reckon with. The dude who graduated with a Bsc in Business Administration from the University of Lagos will be in charge of Konga’s online shopping arm, KOS-Express, its logistics services component, and KongaPay, the company’s mobile payment channel.

Zinox, the first ICT company from Nigeria to be internationally recognized as an Original Equipment Manufacturer (OEM) had pioneered the eCommerce industry with BuyRight Africa more than a decade ago, but that experiment failed spectacularly because of the absence of supporting infrastructure. Leo Stan Ekeh is leaving no stone unturned to make sure history does not repeat himself. Hence the appointment of someone who knows his onions in person of Siji Ijogun