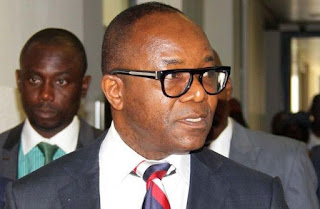 The Minister of States for Petroleum Resources, Dr. Ibe Kachikwu, and Group Managing Director of the Nigerian National Petroleum Corporation, NNPC, Dr. Maikanti Baru, have disagreed over the actual number of refineries approved so far by the current administration.
At the
Nigeria Oil Industry Award Dinner at the recent 2018 Offshore Technology Conference, OTC, Houston, Texas, in the United States, where he was the special guest of honour and received an award, Baru had told journalists that so far, the Buhari administration had approved a total of 13 refineries.

According to the NNPC group managing director, a total of 35 firms expressed interest to establish the refineries. He said less than half got the approvals from the Department of Petroleum Resources, DPR.
However, in a 5 minutes, 8 seconds video posted on Facebook by the Ministry of Petroleum on Wednesday, Kachikwu said only 10 modular refineries were approved from 2015 to date.
According to him, out of the ten, just two (at Ogbel and Kwale Rivers States) have begun construction, while the government is still “pushing” for the others to begin.
He revealed that the two already under construction will be ready for use in the next one year.
“We came up with what to do with illegal refining in the Niger Delta. So, we came up with the concept of the modular refinery. Till date, we have targeted and approved about ten of those. Two are basically on land now and they are beginning to construct. Hopefully, in the next one year, we will be able to deliver real result while we keep pushing for the other eight,” he said
However, checks by SweetcrudeReports showed that Kachikwu’s number tallies with that provided by Vice President Yemi Osinbajo. In December 2017, Prof. Osinbajo through his Special Assistant on Media and Publicity, Mr Laolu Akande, said 10 already approved modular refineries were located in five out of the nine states in the Niger Delta region.
According to the vice president, the refineries are located in Akwa Ibom, Cross River, Delta, Edo and Imo states.
Osinbajo said that two of the refineries – Amakpe Refinery (Akwa Ibom State) and OPAC Refinery (Delta State) – have their mini-refineries modules already fabricated, assembled and containerised overseas, ready for shipment to Nigeria for installation.
The total proposed refining capacities of the 10 licensed refineries stand at 300,000 barrels.
The idea for modular refineries was conceived after the country failed to get investors to key into reviving the four government-owned refineries in the country.
A recent report by Premium Times revealed that none of the four refineries currently function up to 50 percent of their capacity.
The establishment of modular refineries is one of the key policies of the Buhari administration to resolve agitation in the Niger Delta, where most of Nigeria’s crude is located. The government hopes to use the modular refineries to stop illegal refining of crude and also create employment and wealth among residents of the Niger Delta