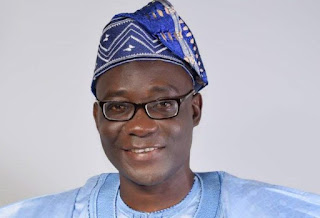 Successful businessman and PDP Chieftain; Mr. Cyril Fasuyi has finally dumped the Peoples Democratic Party.
Fasuyi, a former House of Reps
Contestant and leader of the party in Ido/Osi Local Government Area made this known to reporters at a well-attended meeting of prominent leaders and stakeholders of the party last weekend at the Olojudo’s palace in Ido Ekiti, Ekiti State.

According to information made available by media consultant Niyi OjoFasuyi led other party stalwarts like Hon. Taye, Olatunji, a Commissioner in Ekiti SUBEB, Chief Olatuyi, former State Secretary of the PDP and thousands of their teeming followers and supporters out of the party in reaction to the imposition and conduct of a carefully manipulated gubernatorial primaries which produced Prof. Kolapo Olusola Eleka as the PDP Gubernatorial candidate in Ekiti last week. The announced their immediate resignation from the party and promised to soon make official, their next destination.
Amidst cheers from thousands of supporters who attended the meeting, a resolution was passed for everybody in Fasuyi’s political group to decamp en mass from the PDP. Some of the community leaders spoke glowing of Fasuyi and referred to him as a beacon of hope and leader of the community whose political steps and actions they would follow at any time.


Mr. Fasuyi he said has proven to be a humble, responsible, compassionate, helpful and reliable leader who has assisted the community on several occasions. Fasuyi’s group was equally miffed that the present administration has no physical presence in the town or in the entire local government in its almost four years of existence and as such opined that there was no reason why the local government should embrace continuity of poverty and a one man selfish show.
Posted by MAN ABOUT TOWN at 11:47 PM