All The Details As Lagos Kings Elegushi & Dosunmu Fight 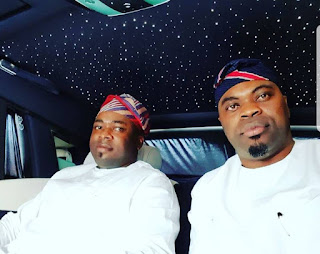 .    Only those who have been living under a rock can fail to be aware of the bromance between Elegushi of Ikateland Ọba Saheed Ademola Elegushi and Oba Lekan Dosunmu the Akinsiku of Lagos. The two royal darlings of high society have been buddies for a long time.

Several times people have tried to come between them only to find out that their friendship is as steadfast as the rock of Gibraltar. Both of them have also at various times come out to boast that nobody and nothing can separate the two of them.

Nobody, that is, except a woman. And not just any woman if undercurrents picked up by Lagos Times are anything to go by. It is being claimed in some quarters that the bosom friends have had a falling out, that they even exchanged frenetic  verbal blows that would have made Mike Tyson proud.

The exact reason for the rumoured falling out remains unclear especially since the two of them and their people remain silent over the matter for now. That has however not stopped rumour mongers from insinuating that the person at the centre of their fight is none other than the monarch’s regal wife Olori Aramide Elegushi.

Concrete indication that things have fallen apart came on  Friday, May 4, 2018, when Akinsiku buried his father, Chief Adebola Alabi Dosunmu. During the grand reception at Queens Park, Victoria Island, Oba Elegushi was nowhere to be seen as he pointedly shunned the ceremony. This naturally sent tongues wagging although some people gave numerous excuses for his absence.

If his no-show at that event raised suspicion, then the recent wedding of Dapo Alli-Balogun’s son at The Haven Event Centre, GRA Ikeja, Lagos all but confirmed the rift between the two former BFFs. During the event that Oba Elegushi and Ọba Dosunmu both attended, they deliberately put each other at arm’s length, doing their best to avoid each other, not even exchanging the courtesy of a simple greeting for old times’ sake.

Those who witnessed the frosty way they treated each other were flabbergasted at what could have caused such a beautiful friendship to be broken. Not even their close friends have been able to reconcile the two young men who are famous for their flamboyant dressing and stylish swagger