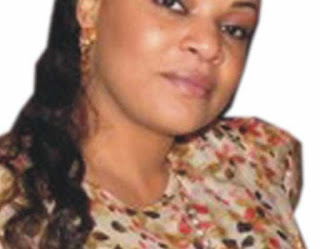 One of the flower girls of high society Mina Okoloko is full of regrets as she flounders in a river of what ifs. The marriage to Notore boss Jite Okoloko that she took great pains to plant and nurture for so many years has ripened but she is not there to enjoy it. Instead another woman is
reaping the marital fruits of the seeds Mina had sown all those years ago.

Those close to the fair complexioned beautician tell of how her bitterness and frustration at the way things turned out shows no sign of ending. Rather than be the apple of Jite’s eyes like before, she is like a dirty orange discarded on the roadside as Jite enjoys a sweeter, riper, rounder fruit. She could only seethe in silence as the new woman in Jite’s life totally captured his heart and made thoughts of Mina in the Notore Fertilizer boss’s mind a distant and fading memory.
Even though she was well compensated with a mouthwatering settlement package, Mina would rather her marriage were still intact and she were still able to bask in the glow of a thriving and loving union with one of the nation’s most powerful. The recent news that Jite’s new lady love put to bed, delivering a set of twins came as a knockout blow to Mina who harboured secret fantasies that the wall of separation between her and Jite could in time be pulled down.
Now that reality has dawned loud and clear on the boss of Beauty Concerns, Mina has taken refuge in the daily grind of keeping her business afloat. The beauty spa which she left moribund for some time while she briefly flirted with a happily married life has been revived with help from Jite’s alimony payments.
For a long time after her marriage crashed, concerned friends of Mina had been advising her to get a grip and move on with her life. It seems she has finally succumbed to the helpful pressure as she few days back threw a spectacular party for the grand relaunch of Beauty Concerns Med-Spa.


The grand re-opening of the ultramodern facility was graced by the crème de la crème of high society. In attendance were Kate Henshaw, Tonye Halliday, Linda Ajiofor, Kemi Sokenu-Morris, Vivian Oputa and Shola Amusan among others. Prominent female politician Senator Daisy Danjuma was the special guest of honour