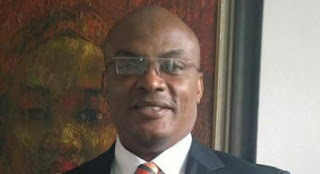 A former Executive Director, Marketing Communication of Globacom, Okon Iyanam, was on Wednesday fatally shot by
yet unidentified gunmen.

Qed.ng could not independently confirm where the attack took place.
One of his former colleagues at the telecoms company, however, told this online newspaper that the theatre art graduate of the University of Calabar was shot at his guesthouse in Mowe, Ogun State.
The assailants were said to have woken him up from sleep before killing him.
Iyanam was until his death the chief executive officer of Bond Consulting.
A pioneer staff of Globacom, Iyanam was special adviser to the chairman, Mike Adenuga, general manager corporate communications and general manager corporate sales.
He left Globacom and was briefly with the Enyi Odigbo-led DDB Lagos before joining Insight/Grey.
At Insight, he was on board appointment with specific functional responsibilities for the strategic planning department, a department overseeing all aspects of brand management and communications development using applicable Grey International research and proprietary instruments.
Iyanam also served as chief marketing officer of Vmobile Nigeria, now operating as Airtel.
He returned to Globacom in 2009 as head, special projects in the company’s communications department.
He was also one-time assistant general manager sales & marketing at Leventis Group of Companies, aside from having a stint at UAC Nigeria Plc. as brand manager.
A former group managing director of Quintessentially Nigeria Ltd. (QNL), Iyanam in 2012 petitioned the then Inspector-General of Police, Mohammed Abubakar, over alleged unlawful arrest and threat to life by former chairman of the National Population Commission, Festus Odimegwu.
Mr Odimegwu, who was QNL chairman, also petitioned Mr Abubakar over an alleged theft of N50 million from the company by Iyanam.
Iyanam was a former Akwa Ibom governorship aspirant under the platform of Accord Party.