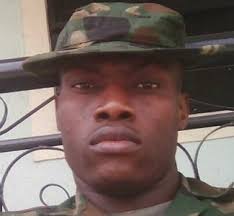 The Lagos State Police Command has arrested a naval rating, Yusuf Owolabi, for allegedly stabbing a woman, Taibat Badru, to death in Egan, a riverine community in the Ojo council area of Lagos.
The naval rating, who was
said to be the son of a factional traditional ruler in the community, allegedly stabbed the woman with a knife on Friday.

The 55-year-old was confirmed died at a general hospital.
PUNCH Metro gathered that the suspect was arrested by policemen attached to the Ilemba Hausa Division on Saturday and was transferred to the State Criminal Investigation and Intelligence Department, Yaba.

It was learnt that an aide to the Speaker of the Lagos State House of Assembly had petitioned the state Commissioner of Police, Edgal Imohimi, who ordered the arrest of the suspect.
A community source said the incident was caused by a tussle for the position of the baaleof the village, lost by the suspect’s father, Moshood, to a member of the deceased’s family.

The development reportedly pitched members of the two families against one another.
According to the source, the suspected killer rating, who was recently deployed in Lagos from Port Harcourt, Rivers State, arrived in the village in company with a friend.
The source added that the suspect, who was armed with a knife, got himself drunk before he picked a fight with the son of the deceased woman, named Quadri.
Quadri reportedly invited his mother into the clash and the woman was stabbed to death.
The source said, “The family members of Moshood and his rival always fight one another. There was a time the house of Moshood was set ablaze by the people of the village over this matter.
“But the fight that led to the death of the woman started between the naval man and Quadri, the son of the deceased.
“Quadri ran into their house to inform his mother about the scuffle and as the mother rushed out, the suspect brought out his dagger and stabbed her in the back.
“When efforts to stop the blood gushing out of the woman failed, they rushed her to the Alimosho General Hospital at Igando where she eventually died.”
The Chief Press Secretary to the Speaker of Lagos State House of Assembly, Mr. Musbau Rasak, said the woman was his sister.

He said, “A naval rating with no 815/448, Yusuf Owolabi, aged 24, son of the factional baale of Egan and one other at large, went to Egan community and used a knife to stab one Tohbat Badiru, aged 55 years, in her back. She bled to death on her way to the general hospital. The suspect has been arrested and detained.”
Posted by MAN ABOUT TOWN at 4:12 AM