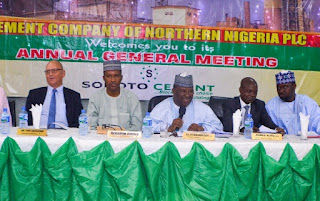 
Executive Chairman/CEO of
BUA Group, AbdulSamad Rabiu who made this known on Thursday in Sokoto Stateat the company’s 39th annual generalmeeting identified shortage of energy as the primarychallenge.


Rabiu said the company had revenue of N19,588,260,886 for the 2017 financial year as against N14,087,553,499 recorded in 2016 though cement demand in Nigeriacame down to almost 20 percent compared to 2016.Abdul Samad Rabiu who described the revenueincrease as the highest in the company’s history saidimproved Cement prices and efficient cost management werefactors that led to the achievement. Rabiu then assuredstakeholders of sustenance in the figure and dominance inthe home market and also penetration into some key strategicmarkets.
According to Rabiu, “Low Pour Fuel Oil(LPFO) which is the main energy used by the Company has tobe supplied from sources other than the Kaduna Refinerywhich is the closest to CCNN’s plant and had not beensupplying LPFO for quite a long time now,” Rabiustated.
“Cement demand in Nigeria in 2017 camedown by almost 20 percent compared to 2016. During the year2017, the Company had revenue of N19, 588,260,886 comparedto the N14, 087,553,499 it recorded in 2016.”
Continuing: “Improved Cement prices andefficient cost management contributed to higher revenue andthe good margin that was the best witnessed so far in thecompany’s long history. This is indeed an excellentachievement which we hope to sustain in the company goingforward.
The AGM endorsed the gross dividend of N1.25k‎recommended by the Board of Directors of the Companyand Total equity and liabilities of CCNN, rose from N20,030,222,016 in 2016 to N24, 648,675,929 for the financialyear ended.
Posted by MAN ABOUT TOWN at 9:42 AM