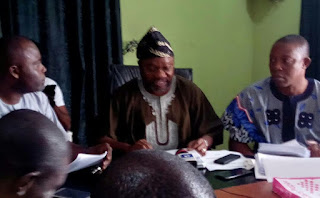 Popular Osun Gubernatorial aspirant, Kunle Rasheed Adegoke - widely known as KRAD- has provided twelve reasons why the primary election to determine the gubernatorial candidate of the All Progressives Congress in Osun state is compromised.

He also provided reason why
he would not boycott the process in an interaction held earlier today.

His views are presented as made available to societynow.ng

We understand that the leadership of our party, All Progressives Congress (APC), has declared that the primary election to nominate the governorship candidate in Osun State shall be by direct method in which all card carrying members of the party shall exercise the right to vote. This stance has been laboriously justified by the National Chairman of our party, Comrade Adams Oshiomhole, who canvassed the argument that it is more democratic and cheaper than the ‘money-induced’ process of collegiate method of nominating candidates.

However, as sound as the argument is, it is dogged by certain constitutional, legal, political and moral challenges which simply expose the leadership of our party as being less law-abiding than we ordinarily would expect. This conclusion is explained anon:

1. We have observed that the procedure adopted in passing the political fatwa endorsing direct primaries is less than constitutional. It is the case that while Article 20 of APC Constitution, 2014 (as amended) recognizes the power of the National Working Committee to enact guidelines for conducting primaries towards nomination of candidates for the party, such power is subject to the approval of the National Executive Committee of the party.

2. For the National Executive Committee of the party to approve any guidelines enacted by the National Working Committee, it must sit in a meeting of which 7 days’ notice must have been given to the members prior to its holding. In the present circumstance, while the National Working Committee of our party sat Monday July 16th instant, there is no sufficient time to convene a meeting of the NEC of the party before the July 19th (tomorrow) when the primary election is to hold.

3. A safety valve for the present NWC would have been to adopt the existing 2014 Guidelines by which the primaries in Edo, Ondo, Anambra and Ekiti were successfully conducted which allowed indirect primaries to hold in such States and by which change of baton was effectively effected in those States.

4. As per legal challenges, it is certain that INEC cannot mobilise at least 332 personnel to monitor the direct primary election in 332 Wards existing in Osun by Thursday the 19th day of July, 2018. If the election would be conducted through and supervised by the compromised officials of government who are already prominent campaigners of the State-anointed aspirant, Alhaji Gboyega Oyetola, then, military dictatorship cannot be less democratic as the determination of the present government in determining its successor is more than glaring.

5. Less than 24 hours to the novel direct primary election, no Guidelines have been issued by the National Working Committee with the approval of the National Executive Committee to guide all aspirants and voters. It is clear that there are no rules in form of Guidelines to even govern the election. It is a game without rules, which is an advance notice of an imminent chaos.

6. Less than 24 hours to the novel direct primary election, it is certain that All Progressives Congress has no credible membership register to guide the election in Osun State. None of the 17 aspirants cleared by the Screening Committee of the party, including myself, has been shown any membership register. No such register has been publicly displayed anywhere to determine who is qualified to vote or not as a party member. No party goes into an election without a voters’ register. It is only in Osun State that some leaders of the party are practising this electoral abracadabra.

8. The supporters of the anointed aspirant, backed by State apparatus, have been distributing fake membership cards recently printed and soliciting for votes with huge cash. Would it not be good for our leaders to insist that anybody inducing votes with cash should be disqualified bearing in mind the allegations flying around as regards the just-concluded Ekiti State governorship election?

9. The team working for Alhaji Gboyega Oyetola has been distributing a form together with a concocted register of members by which they are issuing membership cards for persons who are neither registered nor ordinary members of APC who are ready to take money and vote for them. Is this primary election not already schemed to favour Oyetola?

11. One would expect that our National Chairman’s love for deepening democracy through direct primary would be applied to the 2019 Presidential election by which all members of APC would vote in their various Wards which results would be collated at the Local Government level, transmitted to the State level before being collated at the national level in order to determine our presidential candidate.

12. It would also be impressive for our ‘democratic’ National Chairman, Adams Oshiomhole, to deepen democratic ethos in the party by applying direct primaries to all other elections like National Assembly, State Assembly and Governorship elections in all States so that our members can be more involved in the new-found democratic process of direct primaries. Any attempt to change the rule after Osun State gubernatorial election would only expose the militant National Chairman as less than honest but hypocritical which I want to believe he is not.

I, Kunle Rasheed Adegoke (K. Rad), unequivocally state that this primary election is already schemed in favour of Alhaji Gboyega Oyetola by some leaders of the party. I am only going to participate in it for obvious legal reasons as I am not prepared to boycott any election to give them an opportunity to have a consensus candidate. I hereby thank my fans, well-wishers and supporters for their unwavering love and support and expect to see you all at the victory party as God is sufficient for us to ensure lasting victory.