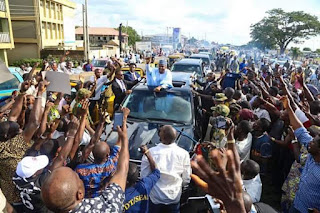 Senate President Bukola Saraki got a massive heroic welcome to his state, Kwara on Tuesday, July 17 2018.

The development comes 10 days
after the Supreme Court discharged and acquitted Saraki of allegations of false assets declaration.

The mammoth crowd waited for all of 8 hours to welcome Saraki at the Ilorin International Airport.

The supporters kept the atmosphere lively with lots of dance and music till the Senate President arrived via a 4.00p.m flight. 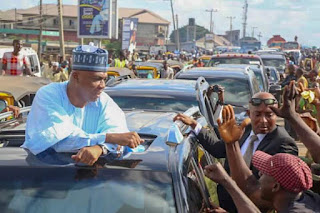 Multiple sources share the verdict that the development confirms Saraki’s tremendous standing in and beyond the state.

The Senate President who drove straight from the Airport to the palace of the Emir of Ilorin, Ibrahim Sulu Gambari in a media chat stated about the 3year legal battle against alleged  corruption charges ''

“It’s been a long journey for all my own people in the state, and today we thank the Almighty God for this. I want to thank all of them who did not at any time waver. They believe in my innocence and supported me throughout those three very tough years and it was a great feeling for all of us.