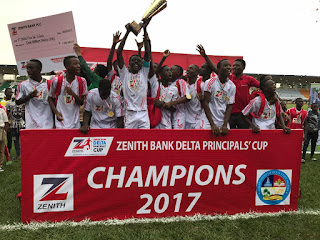 The third edition of the Delta State Principals’ Cup organized for all secondary schools in the state and sponsored by Zenith Bank Plc starts next week.

According to
the organisers, the preliminaries of the revived annual ‘catch-them-young’ initiative will kick-off on October 31.

The competition which was been grounded for many years came back to life courtesy of  Zenith Bank and  will be competed for by over 1,200 private secondary schools and 446 public government secondary schools in the state.

On November 1, the preliminaries will start in all the 25 Local Governments in the state with all registered schools competing for just a single slot in each LG.

Commissioner for basic and Secondary Education in Delta State, Mr. Chiedu Ebie, is expected to play a supervisory role to ensure the smooth-running of the competition which is very dear the heart of Governor Ifeanyi Okowa.

Group Managing Director of Zenith Bank, Peter Amangbo, has assured that the competition this time would be an improvement on the last edition.

Amangbo stated that the bank was always elated to contribute to the development of the youth in the various endevours in the country.

“This is youth football competition but we do much more than that. We are also into other sports and we try to bring out talents for the country and also to engage the youth positively in their various areas of competence.

“We are going to make this edition better because improvements must be recorded as we move on. So far, we are proud of this partnership with the Delta State Government and we expect all the participants to enjoy themselves.” Amangbo said.

Already, the media conference to herald the competition will take place on Monday October 29.