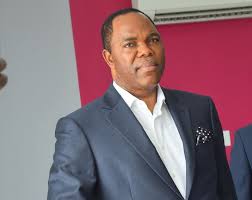 For Nigerian billionaire and lawyer, Barr. Olatunde Ayeni, it has become a case of one day, one trouble as the defunct Skye Bank former Chairman has continued to swim in the sea of controversies amidst financial improprieties.
This time,
ASO Savings and Loans Plc, an Abuja-based financial institution owned by Ayeni has been accused of hiding N9.8bn belonging to the Federal Government of Nigeria. This is coming even as the Federal Government has promised to persecute directors responsible for the failure of the erstwhile Skye Bank led by Ayeni.

According to the Independent Corrupt Practices and Other Related Offences Commission (ICPC), the money which was realised from the sale of government assets was illegally deposited in ASO Savings and Loans Plc instead of the federal treasury.
The commission in a statement by its spokesperson, Mrs. Rasheedat Okoduwa, said that the Managing Director of the bank, Mr. Kunle Adedigba, had been invited and interrogated.
The anti-graft agency said the bank claimed that it did not have enough funds and was willing to hand over some of its properties to the Federal Government.
The statement read in part, “In 2005, the Federal Government set up a committee, the Ad Hoc Committee on the Sale of Federal Government Houses, to sell some of its properties in the Federal Capital Territory.
“The ICPC received a petition on the work of the committee and commenced investigation, in the course of which it unearthed the fact that the sum of N9.8bn realised by the committee between 2010 and 2014 from the sale of government properties which was deposited in Aso Savings and Loans Plc., was not remitted to the federal treasury by the financial institution rather, it was used.
“Amongst the several officials invited for investigation, the current Managing Director of Aso Savings and Loans, revealed that the bank is currently experiencing paucity of funds, therefore, it is willing to swap some of its properties located in Abuja and Lagos in exchange for the unremitted funds.”
The anti-graft agency said it was committed to the recovery of the full value of the unremitted N9.8bn by taking the properties offered in lieu for the government, subject to satisfactory valuation by the Ministry of Power, Works and Housing.

Thewitness
Posted by MAN ABOUT TOWN at 5:36 AM