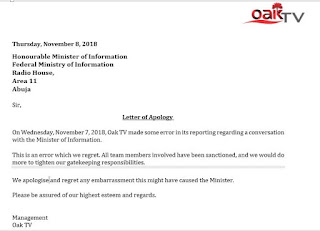 The whistleblower on the Federal Government allegedly spending of N3.5million monthly on the feeding of detained IMN leader, Ibrahim Elzakzaky has apologized for telling the truth.

OAK Television, the
news platform responsible as issued an apology to the Minister for Information for releasing the video where he made the claim.

This development comes barely 24hrs after the Minister claimed he was speaking off camera.

OAK Television attributes the release of the video to gate-keeping errors.

Societynow.ng, however, learned attempts to ‘'prevent revocation of access'' and ‘'shadowy consequence'' forced OAK T.V to issue an apology to the Minister for the release of the video.

Both the minister and the television platform do not dispute the authenticity of the video that is earning Mr. Mohammed unwanted attention.