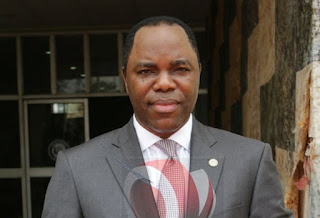 Former Chairman and Managing Director of Skye Bank Plc (now Polaris Bank) – Tunde Ayeni and Timothy Oguntayo – have been arraigned in relation to alleged money laundering offences involving about N4.75billion and $5million.
Ayeni and Oguntayo were arraigned on
Monday before Justice Nnamdi Dimgba of the Federal High Court, Abuja on an eight-count charge brought against them by the Economic and Financial Crimes Commission (EFCC).

The duo, who was accused of committing the alleged offences between 2014 and 2015, pleaded not guilty when the charge was read.


Their lawyers applied for bail on their behalf, applications the judge granted, admitting each of the defendants to bail at N50million each.
Posted by MAN ABOUT TOWN at 2:08 AM