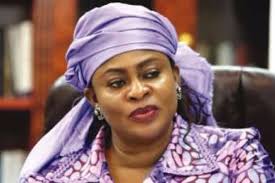 A Federal high court sitting in Lagos south west Nigeria has entered judgement in favour of Sterling Bank Plc jointly and severally against the former Aviation minister, Senator Stella Oduah and her company, Sea Petroleum and Gas Limited in the sum of
$16,412,819.06 and N100,493,225.59 respectively.


The sum being the outstanding debt owed by the Sea Petroleum and Gas company and duly guaranteed by Senator Stella Oduah as at November 2016 to the bank with accrued interest.
The Presiding Judge, Justice Ayotunde Faji in his judgement while granting six reliefs out of the fourteen reliefs sought by the bank, issued order of attachment in favour of the bank against such entire assets of Sea Petroleum and Gas company, cash in bank, bond, deposit, real estate, stocks, all forms of negotiable instruments in all stock broking firms, discount houses, mortgage institutions, financial houses, microfinance houses, and all licensed banks within Nigeria, having Sea Petroleum as beneficial owner of funds to the full extent of the unsatisfied portion of the sum of $16,,412,819.06 and N100,493,225.59 respectively as at November 2016.and other accrued interest.
The court also declared that having regard to the clear and unambiguous provisions of the deed of guarantee and indemnity personally executed by Senator Stella Oduah in favour of Sterling bank over facility advanced to the Sea Petroleum and Gas company limited who has failed upon demands to liquidate same, Judgement can be granted against Senator Stella Oduah for the unsatisfied portion of the sum owed by Sea Petroleum and Gas company to the bank.
The judgement of the court was sequel to a debt recovery suit filed before the court by a Lagos lawyer, Barrister Oluwakemi Balogun SAN on behalf of Sterling bank Plc .
In an affidavit sworn to by business manager, Maritime of Sterling bank Plc, Mr Segun Akinsanya, with 34 exhibits attached filed and argued before the court by Mr Balogun (SAN), Mr Akinsanya in the said affidavit averred that on October 8,2012, the bank granted a lease /cabotage vessel finance facility to Sea Petroleum and Gas Company in the sum of $10,069,620.25 to finance one unit 5,000 MT tanker vessel.
The loan was secured by unconditional personal guarantee of the company director, Princess Stella Oduah supported by statement of her net worth, legal mortgage of two properties worth N135 million, power of Attorneys of the tanker vessel in favour of Sterling Bank and fully executed irrevocable standing payment order and tripartite remittance agreement between First Bank plc, Sterling Bank and Stella Oduah.
It was further averred that between June 27.,2013 Sea petroleum company requested for and was granted additional facilities in the sum of $449,600.00 for post delivery expences, $642,954.00 and $350,000 to meet the requisite conditions in securing of the Federal High Court in securing the release of the tanker.
However, in her counter affidavit, Senator Stella Oduah, contended that the Vessel purchased with the loan facility was registered in the name of Sterling Bank until the defendant discharges the facility.
According to her, the bank was to appoint technical managers for the Vessel to ensure it is in good condition. However, the managers appointed by the bank mismanaged the vessel resulting in several losses to the defendants. The bank ignored all pleas for the managers to be changed while the company, Sea Petroleum and Gas limited could therefore could not meet up with its financial obligations.
The non payment of the loan was thus occasioned by the bank’s inaction and it would be unjust to impose on the company the liability occasioned by the bank’s inaction. The bank still retained the Vessel since ownership was in the bank. The bank would have expected to sell the vessel but failed to do so in spite of the company’s consent to the sale. The bank is not also seeking a sale of the vessel in this suit.
Consequently, the impossibility of performance is a defence to claim for specific performance. Where a Plaintiff defaults in his obligation under an agreement he cannot succeed in an action for specific performance.
In his judgement, Justice Faji said,” The defendant by letter dated 6/2/15 acknowledged it’s indebtedness. This is part of Plaintiff’s case to show that the debt is not disputed. The dependant did not comply with the repayment under the various facilities. The Sea Petroleum and Gas limited statement of account for the period 1/9/12 to 24/11/16 shows a debt balance of $16,412,819.06 and Naira debit balance of N100,493225.59.
“As regard Sea Petroleum therefore, it is clear that the company was all material times indebted to

Sterling Bank,Stella Oduah guaranteed the indebtedness and issue a guarantee and indemnity. The bank was to have a lien upon the immediate right of set-off against Stella Oduah whether on any current, deposit, domiciliary, or other accounts and assets.

“I do not see any defence to this claim by Sea Petroleum and Gas company, As regards Stella Oduah, having guaranteed the loan and given an indemnity, she is equally liable with the company to pay the debt. I grant reliefs 1-6 in so far as they relate to the assets of Senator Stella Oduah and Sea Petrol and Gas company limited within Nigeria”