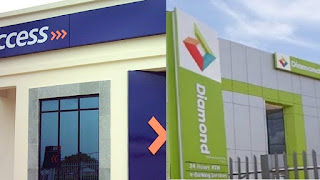 Joined as co-defendants in the ensuing legal battle are Securities and exchange commission SEC and Central Bank of Nigeria CBN.

In an affidavit sworn to by Chief Don Etiebet and filed before the court by a Lagos lawyer Barrister Olujumobi Orioye,the deponent averred that Access bank and Diamond bank commenced a scheme of merger on the 24th of January, 2019 in a bid to merge both banks, SEC and CBN granted approval in principle to the scheme of the merger.

Thereafter  Federal High court directed that the meeting of the fully paid-up ordinary shares of the bank be held.

However, Chief Etiebet alleged that prior to the commencement of the scheme of merger Access bank and two of its Directors were being investigated by Police in an allegation bothering on forgery of bill of lading, obtaining money by false pretences, conspiracy to commit felony, stealing of money, conspiracy to defraud amongst others.

That the investigation led to the preferring of information in charge number HCS/01C/2019.COP VS Herbert Nwigwe  & others and Charge number ID/8795C/2019-COP VS cast Oil & Gas Ltd & Others.      That the criminal charges are weighty and  based on presumed fraud and if disclosed to  SEC And CBN the already granted approval in principle would not have been granted.

Access bank and two of its directors were accused to have obtained the sum of over $6,300,000 USD from Top Oil& Gas Development limited for the supply of 10,000 metric tonnes of Automotive Gas Oil and converted the money to their own use and benefit.

The amounts  involved are substantial and makes the bank bogus than it claimed to be when it sought and obtained the approval for the scheme of merger.

The applicant contended that he can exercise his right under section 300(d)and(f) of the company and a Allied matters Act 2004 to seek the order of the court to restrain the respondents from continuing with the scheme of Merger between the two banks upon the pendency of the Criminal charges.

Chief Etiebet  avered further that if he failed to protect his right in Access bank Plc, his interest and right will be eroded completely,therefore it will be in the interest of justice to restrain the respondents from continuing with the scheme of merger between the two banks pending the determination of this suit,and delay in granting the application will entails irreparable damage and serious mischief to him if the application is not granted.


When the application came up today for hearing Mr Orioye stressed  the urgency need for the application to be heard but the presiding Judge, Mohammed Liman while adjourning till 4th April, 2019 for hearing and ordered that the respondents should be put on notice by serving them the court process.
Posted by MAN ABOUT TOWN at 3:15 AM